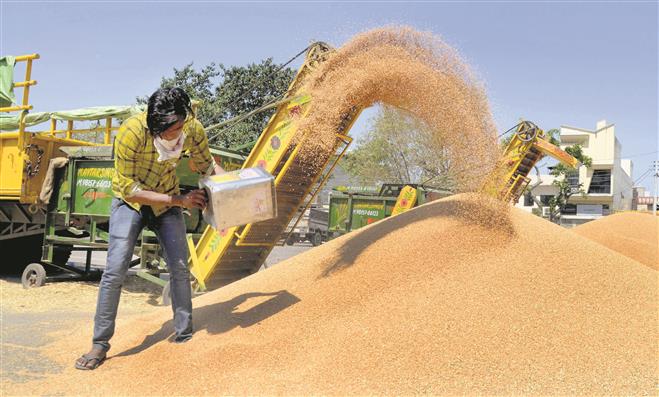 Central government agencies have procured 18.24 lakh tonnes of wheat in Punjab and 36.30 lakh tonnes in Haryana during the ongoing rabi season till April 15, according to Food Corporation of India (FCI) data.

Central government agencies have procured 18.24 lakh tonnes of wheat in Punjab and 36.30 lakh tonnes in Haryana during the ongoing rabi season till April 15, according to Food Corporation of India (FCI) data.

An amount of Rs 13.71 crore and Rs 735 crore has been transferred into the accounts of farmers in Punjab and Haryana to date.

We are transferring MSP directly to the farmers’ accounts in Punjab, which has been possible with the cooperation of the state government and arhtiyas.

This is the first time farmers from Punjab and Haryana have been receiving MSP payment through the DBT (direct benefit transfer) mode. The Centre had been pursuing DBT implementation in the two states since 2015-16, but Punjab and Haryana sought repeated exemptions. Just ahead of procurement, Punjab had sought yet another exemption, which the Centre declined.

“With Punjab and Haryana on board, the entire country is now covered under ‘One nation, one MSP, one DBT’ theme,” Food Secretary Sudhanshu Pandey said. He dismissed reports of slow procurement in Punjab. He said the ‘arthiyas’ too would get their commission in account.

Haryana leads the tally among 11 states and two UTs where wheat is procured at MSP (Rs 1,975 per quintal rate this year).