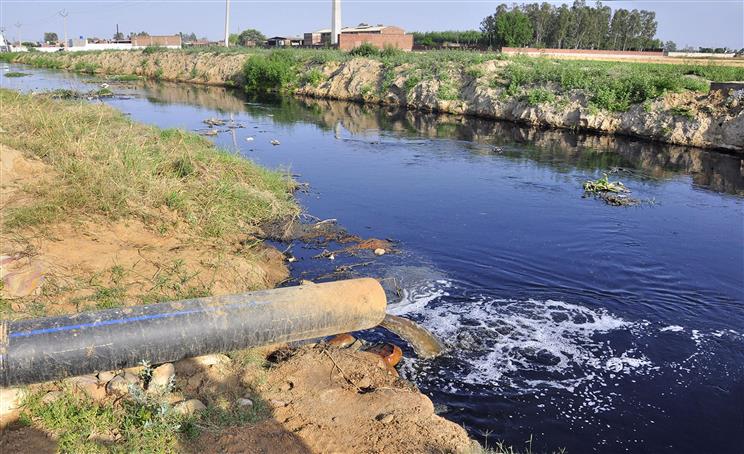 Despite farmers repeatedly raising demands of the provision of clean and treated water and of irrigation waters to villages at the rear end of drains, the heavily-polluted drains of Doaba wreak havoc upon the clean water dream. Polluted for the past many decades, no government has shown the will to address the pollution in the once crystal clear — but presently heavily polluted drains —Chitti Bein, Kala Sanghian Drain and Bist Doab.

While ecological concerns have taken the centre stage in recent morchas, clean water has emerged as a key demand of farmers across the state. In Doaba, two ongoing protests have water at the heart of their demands.

Kisan Mazdoor Sangharsh Committee members protesting outside the Jalandhar DC office have been demanding the cleaning of Doaba drains and provision of clean water for irrigation.

Countless villages battle cancer, skin allergies and other diseases. Doaba drains, rather than becoming lifeline for farmers, cause disease and havoc. Successive govts have never been serious about finding cleaning solutions. —Salwinder Singh, A farm leader

The Bharti Kisan Union (Rajewal) has also started taking out marches in Jalandhar demanding Punjab water share be raised, in view of an impending water crisis. A march is also scheduled on December 30 in Mohali on the issue of water.

Amarjot Singh, district youth president, BKU Rajewal, said, “We held a march across villages on December 2 and will be holding another one across Nakodar tomorrow. On December 30, a ‘Mohali Chalo March’ will be taken where five farmers unions — All India Kisan Federation, BKU (Mansa), Kisan Sangharsh Committee Punjab, Azad Kisan Sagharsh Committee and us — will march from Amb Sahib gurdwara to Mohali. Seeing the impending water crisis, the state should stop sharing water with other states.”