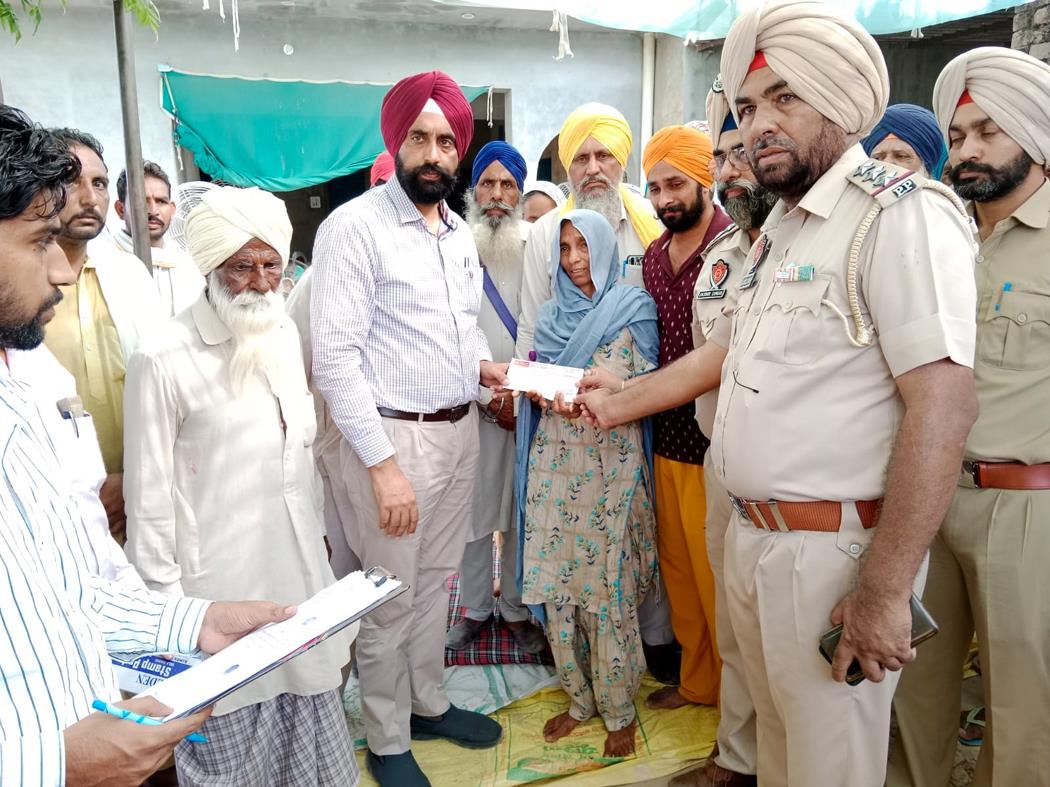 Officials hand over a Rs 3-lakh cheque to farmer Balwinder Singh's family at their house in Bathinda district on Tuesday. Tribune photo

A day after an elderly farmer, Balwinder Singh of Raike Kalan village in Bathinda district, allegedly died by consuming poison during the protest outside the District Administrative Complex (DAC) here, the Muktsar Sadar police have booked Balchhinder Singh of the same village, under Section 306 (abetment of suicide) of the IPC.

Lachman Singh Sewewala, general secretary, Punjab Khet Mazdoor Union, said the accused is the father of dismissed DSP Jagdish Bhola. The district administration today handed over a cheque for Rs 3 lakh to the family of the deceased. “The Muktsar Deputy Commissioner had yesterday promised us that a criminal case will be registered and financial help will be provided to the deceased’s family. Now, we are waiting for waiver of Balwinder’s debt and a government job for his kin. Further, an announcement to stop the auction of his land is also awaited. As of now, his family has not performed the cremation,” said Sewewala.

Meanwhile, as per the FIR registered on the statement given by Gurtej Singh, son of the deceased, his father had taken some loan from Balchhinder Singh a few years ago. “The money lender had got some blank documents signed by my father. Around seven years ago, Balchhinder started harassing my father. Then our family paid Rs 8.5 lakh to him. However, he then made a bogus claim of Rs 1.25 lakh through blank documents and later demanded Rs 5.5 lakh or four-kanal land for settlement. My father was upset and finally took the extreme step on Monday,” claimed Gurtej Singh.

Notably, Balwinder had on Monday come to participate in the indefinite protest of the Bharti Kisan Union (Ekta Ugrahan) and Punjab Khet Mazdoor Union in Muktsar. The protesters are mainly demanding compensation for the damage to cotton crop due to pink bollworm attack last year.