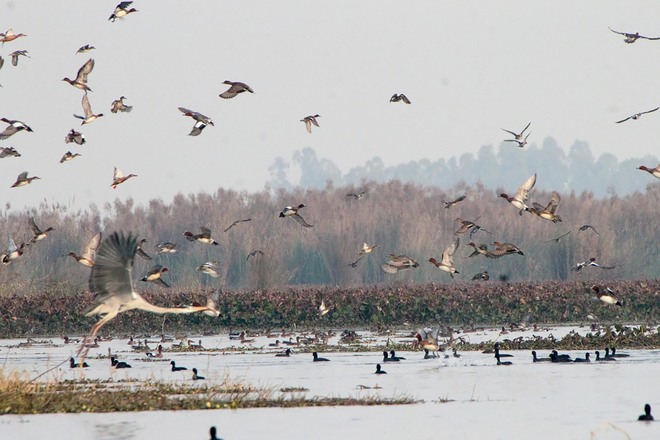 Migratory birds observed during census at the Harike wetland on Wednesday. WWF

The region’s largest wetland at Harike may not be the preferred destination of winged guests from overseas, if the latest bird census trends are any indication.

The 2019-2020 survey of the Forest and Wildlife Preservation Department conducted by the World Wildlife Fund (WWF) in collaboration with various bird clubs pointed towards a “drastic” fall of around 32,000 birds in comparison to last year.

The two-day survey conducted on January 18 and 19 with the assistance of bird club teams from Chandigarh, Amritsar, Faridkot, Jalandhar, Ludhiana and Jagriti Samiti, Nangal, has reported the total count to be 91,025 comprising of 94 species.

In 2018-19, the WWF had recorded 1,23,128 birds at the wetland. Every year, lakhs of winged guests from Siberia, Russia, Kazakhstan and other low temperature regions flock this bird sanctuary from mid-October to December as lakes freeze in their native regions in winters. The winged visitors stay here till March.

Late arrival of winter apart from smog could be the reason behind the reluctance of the avian guests in choosing this region’s wetland.

However, officials believe it to be not an alarming situation keeping in view the average trend of avian guests’ arrival in Harike Lake and more species could be expected till March.

Gitanjali Kanwar, coordinator, aquatic biodiversity (WWF), said the average arrival of birds at Harike would be nearer to 90,000 only. “Had the bird count been 60,000 or so, it would have compelled us to work on the reasoning. Between 90,000 and 93,000 is an average count here and the current count almost matched it. We observed that the overall arrival of all birds’ species was less. This time like we recorded 70,000 Eurasian coots last year, whereas it’s 48,000 this year,” she said.

Admitting the fall in count, she said delayed winters could be the reason as the birds arrived late here. “The current figure indicated a drop if compared to last year when 1.23 lakh birds were spotted, but it was observed twice in a decade when the figure crossed one lakh mark,” she said.

Gitanjali said for first time common merganser was spotted here in November as there was no history of this species coming here before. Similarly, 48,185 Eurasian coot were spotted, along with greylag geese (17,913) and bar-headed geese (6339).