At 8.56pm on Monday, the troops hear the sound of a drone from the Pakistani side when it was hovering over Kalia village 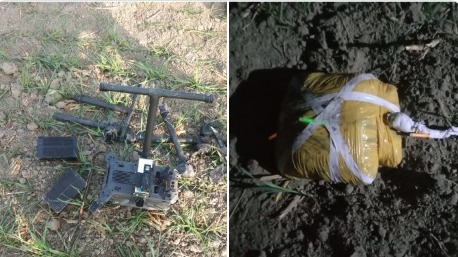 The broken drone lying in the fields; and the polythene with heroin.

Border Security Force troops have recovered a drone and over 2kg of heroin from a village near the India-Pakistan border in Punjab's Tarn Taran district, the fourth such recovery in as many days, officials said on Tuesday.

At 8.56pm on Monday, the troops heard the sound of a drone from the Pakistani side when it was hovering over Kalia village.

The personnel fired in that direction, and during the search recovered 2.47kg heroin wrapped in a yellow polythene, the officials said.

On 06th Dec' 2022, during further search of the area, at about 0850 hrs, a Quadcopter was recovered from the field of Village - Kalia, in broken condition. pic.twitter.com/1aIGnzdw7a

"A metal ring meant for the release of the consignment from the drone was also found attached with it," an official said.

The personnel carried out another round of search operation on Tuesday morning during which they found the broken drone lying in the fields.

“The BSF troops once again foiled a smuggling attempt,” the official said.

There has been a spurt in the movement of Pakistani drones near the international border in the past few days.

On Monday, the BSF foiled a cross-border drug-smuggling attempt as it recovered a drone along with a packet of heroin near the international border in Amritsar district.

On Sunday, a drone was recovered near the international border in Tarn Taran district along with 3kg heroin.

On December 3, the BSF personnel recovered about 25kg heroin, which was air dropped by a Pakistani drone in Fazilka district.