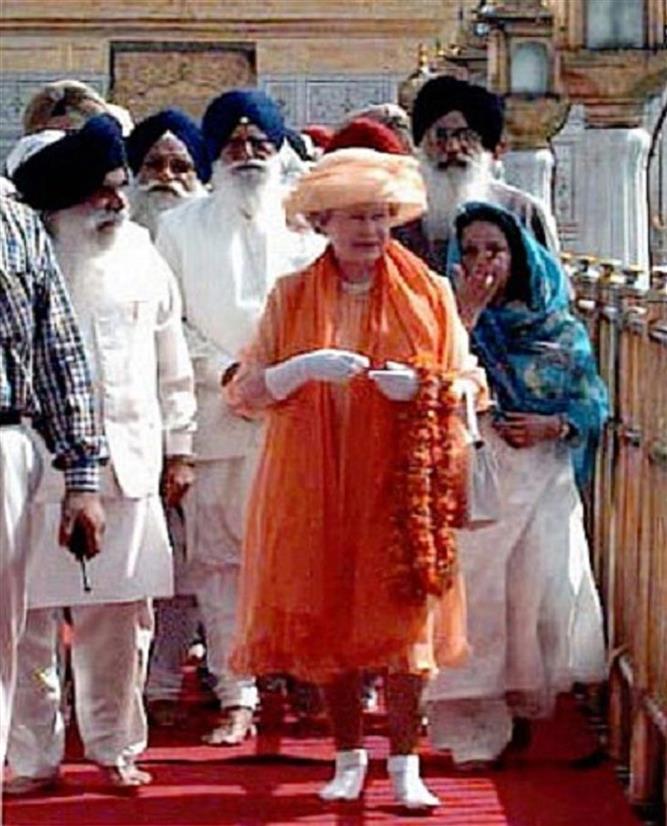 Queen Elizabeth at the Golden Temple during her visit to India in 1997. Photo courtesy social media

Accompanied by her husband Prince Philip, the Duke of Edinburgh, she landed here on October 14, 1997.

As per maryada of the Golden Temple, all are equal. All the four entry points have ‘charan ganga’ (where devotees wash their feet). Security advisers were against her entering barefoot. I remember, the British Embassy had arranged an extra pair of socks that she wore before entering the Golden Temple. Daljit Singh Gill, former secy, SGPC

During her visit, the Queen fell short of apologising for the Jallianwala Bagh massacre that took place on April 13, 1919. Philip sparked a row with his reaction over the number of martyrs who fell to the bullets.

Similarly, an awkward situation had erupted at the Golden Temple, when the Queen was allowed to enter the shrine with white socks.

Nonetheless, the Royal couple was welcomed by then Chief Minister Parkash Singh Badal and SGPC chief Gurcharan Singh Tohra at the entrance of the shrine.

The SGPC had presented her a replica of the Golden Temple and the Queen had gifted a glass flower vase, which has been kept at the museum.

Ironically, the SGPC had to twist the norms of Sikh Rehat Maryada (Sikh tenets), apparently on the request of the Queen’s security advisors, which was highly opposed. The controversy erupted as the Queen had already visited the Jallianwala Bagh barefoot to pay tribute to the martyrs.

Indirectly terming it a violation of the Sikh tenets, he said, “As per maryada of the Golden Temple, all are equal. All the four entry points have ‘charan ganga’ (small pool of water where devotees wash their feet before entering). The security advisers were against her entering barefoot. I remember, the British Embassy had arranged an extra pair of socks that she wore before entering the Golden Temple.”

Since she was supporting the white-coloured gloves, it’s uncertain whether she had accepted ‘karah parshad’ or not. In the visitors’ book, the Queen and the Duke only signed to endorse their visit.

It’s learnt that at the eleventh hour, the programme of the royal guests was altered. Instead of the Golden Temple, they were escorted straightaway to the Jallianwala Bagh from the Amritsar airport.

SK Mukherjee, secretary, Jallianwala Bagh National Memorial Trust, and other administrative officials had received them. They bowed barefoot at the Flame of Liberty memorial and laid wreath at Jallianwalla Bagh, but refrained from submitting an ‘official apology’ for the murderous act.

Also, Philip’s reaction over the plaque he came across with an assertion about the people killed by Gen Reginald Dyer’s troops had also hit the headlines, then.

The precise text that goes on to describe the events of that day is: “This place is saturated with the blood of about two thousand Hindus, Sikhs and Muslims who were martyred in a non-violent struggle.”

Reports surfaced then that he had asserted it to be a “bit exaggerated”, and that it must have included the wounded ones. He had reportedly substantiated his claim by saying that he was told about the killings by General Dyer’s son as they were together in the Royal Navy.

Mukherjee said, “They didn’t offer an apology and left by just signing the visitors’ book.” However, during her address at the State Banquet in New Delhi a day earlier, the Queen mentioned about “difficult episodes” in the country’s colonial history for the first time. She said, “It is no secret that there have been some difficult episodes in our past. Jallianwala Bagh is a distressing example.”