Dwarf disease observed in paddy crop over 34,000 hectares in Punjab : The Tribune India

Dwarf disease observed in paddy crop over 34,000 hectares in Punjab 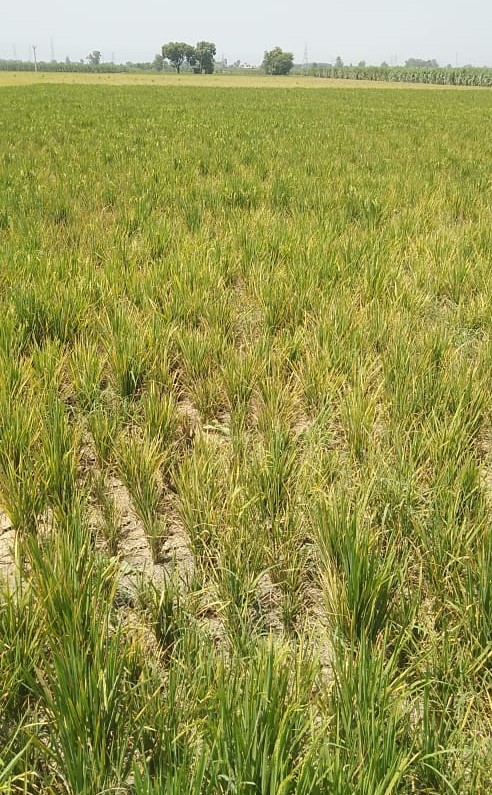 Paddy crop which has been adversely affected by dwarf disease. Tribune Photo

The dwarf disease has been observed in the paddy crop over 34,000 hectares in Punjab with the state agriculture department projecting an average of 5 per cent crop loss in the affected fields.

Ludhiana-based Punjab Agricultural University had earlier found southern rice black-streaked dwarf virus (SRBSDV), which is also known as the dwarf disease, behind the stunting of paddy plants in many parts of the state.

This was the first time that SRBSDV, which was first reported in 2001 from Southern China, had been detected in Punjab.

Because of the attack of this disease, some plants were dead and some were stunted with height remaining one-third from half in comparison to the normal plants in some paddy fields, farm experts said.

Following the reports of stunting of paddy plants, the state agriculture department conducted a survey to assess the impact of SRBSDV disease on paddy fields in Punjab.

According to the survey, the dwarf disease has been found in the paddy area of 34,347 hectares in Punjab.

"The maximum impact of the disease was seen in Mohali, Pathankot, Gurdaspur and Ludhiana,” the official told PTI on Monday.

"An average of 5 per cent yield loss is expected in affected fields,” said the official.

Notably, a few growers in Pathankot and Mohali ploughed the three-month-old standing crop as they were dejected because of the stunted growth of paddy.

“The disease affected the crop which was planted till June 20,” he further said.

According to experts, the maximum impact of the disease was seen in the PR-121 paddy variety as it was sown early by farmers despite the recommendation of planting after June 20.

Mangat said among various factors, high temperature was also conducive to the disease.

According to scientific reports published in other countries, the SRBSDV is transmitted by the nymphs and adults of white-backed plant hopper (WBPH).

Once stunted, the disease cannot be managed by any of the agrochemicals, said farm experts.

Punjab has recorded 30.84 lakh hectares of area under paddy in the Kharif season.

Opposition party Shiromani Akali Dal (SAD) had already sought a compensation of Rs 20,000 per acre from the state government for paddy growers whose fields had been infested with the dwarf disease.