The NGO has installed 25-foot massagers for the elderly protestors 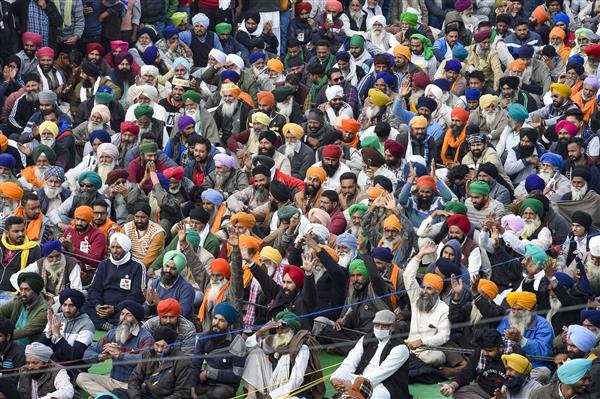 Initially serving only langars, they shifted attention to the other important needs of the protesting farmers when others too started free community kitchens. — PTI File Photo

Khalsa Aid India, an NGO known for providing aid to people in distress, said the "vilification" faced by the organisation for helping their "own people" during the ongoing farmers protest was "unprecedented".

Registered separately as a charitable trust in 2013, Khalsa Aid India has been camping from day one of the farmers protest at the two major protest sites of Singhu and Tikri. Initially serving only langars, they shifted attention to the other important needs of the protesting farmers when others too started free community kitchens.

The NGO is currently running a 600-bed full-to-capacity night shelter along with the two 'Kisan Malls' which provide various items of daily use, such as inner wears, thermals, toothbrush and sanitary pads to those in need.

Amarpreet Singh, the director of Khalsa Aid Project (Asia Chapter), told PTI that a team of six full-time employees and over 150 volunteers from across the country were working tirelessly at different protest sites.

He fears that "bad-publicity and false propaganda would demoralise them".

"They (a section of news media and some people) are asking 'Who is funding you?', 'Are you here supporting them just because they are Sikhs?' or 'What is our agenda?'.

"They never asked us these kinds of questions when we were helping people during the Kerala flood, COVID-19 pandemic or in the Amarnath Yatra's clean-up drive. Then why today?," posed a visibly disappointed Singh.

He asserted that Khalsa Aid India has "nothing to hide" and maintains record of "every single penny donated" to them.

"We are a registered organisation. The Government of India can always check our records whenever they want. But bad-mouthing and spreading of baseless propaganda should stop. This demoralises our volunteers who have come here leaving their jobs, businesses and families with the sole purpose of serving the farmers in these dire conditions," Singh said.

"The protesting farmers, mostly comprising Punjabis, are our own people who helped us in building this organisation in the first place. Of course, we will support them. The reason that some see our support as bigger than the usual is because the protest this time is the biggest that we have seen so far," he told PTI.

Singh, 31, who hails from Punjab's Patiala, admitted that in the past two attempts were made to vilify the organisation like when it provided aid to Rohingya refugees or served langar to the students of Jamia Malia Islamia during their protest against the Citizenship (Amendment) Act.

"Then, some people asked 'why are you supporting Muslims?'. We told them the same thing that we are saying now: Khalsa Aid works for humanity and serves people irrespective of their caste, gender or religion. However, the vilification campaign against us this time has been unprecedented," he said.

To underpin his point, Singh cited reports about 'make-shift foot massager centre' and claimed that it was blown out of proportion by certain news outlets.

The NGO has installed 25-foot massagers for the elderly protestors.

"A journalist asked 'Where did we get Rs 25 lakh for these machines?'. I was stunned by his question and the way he put it across. The actual cost of the machines is Rs 2 lakh.

"In Punjab, we have the culture of pressing the feet of our elders. We initially did the same here also. But there were only a limited number of volunteers and the number of protestors was always increasing. That is when we took the help of technology. Later, we saw stories calling it a 'luxury'," he said.

Farmers from various parts of the country have been camping at different border points of Delhi for over a month now to demand repeal of the three agri laws, which were voted through in Parliament in September amid strong protests by opposition parties.

The three laws have been projected by the central government as major reforms in the agriculture sector that will remove the middlemen and allow farmers to sell anywhere in the country.

However, the protesting farmers have expressed apprehension that the new laws would pave the way for eliminating the safety cushion of Minimum Support Price and do away with the mandi system, leaving them at the mercy of big corporates.

The government has repeatedly asserted that the MSP and Mandi systems will stay and has accused the opposition of misleading the farmers. — PTI