Fall in number of winged guests at four wetlands in Punjab

Late arrival of winter, change in world climate to blame 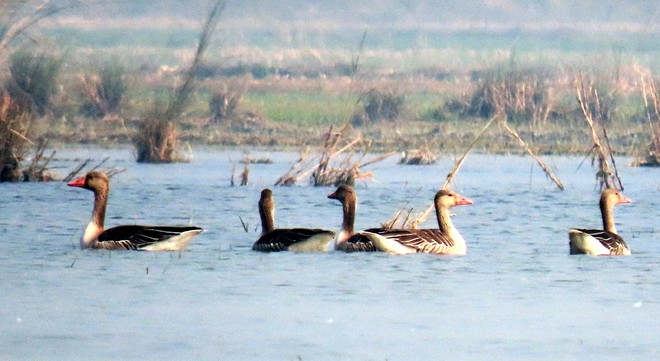 A change in the climatic pattern has affected the number of birds visiting the state’s water bodies, say experts who were part of the recently conducted census in all six wetlands in Punjab. The annual waterbird census was conducted by the Forest and Wildlife Preservation Department, by engaging WWF-India and expert bird watchers from Punjab from January 4-22. It revealed that barring two wetlands, the bird count had gone down in the remaining four.

While rare sightings have increased in all six wetlands, the number of birds has declined as compared to the last year. However, department officials claimed that the changing weather and climate pattern across the world had hampered bird movement from Russia and other countries.

The census was carried out in Nangal, Ropar, Ranjit Sagar Conservation Reserve, Keshopur-Miani community reserve, Harike and Kanjli. There has been a drop of about 25 per cent in the number of migratory birds at the region’s largest wetland — Harike, also known as Hari-ke-Pattan — this year as compared to the previous year.

According to the census conducted by World Wildlife Fund (WWF) with the helpof Chandigarh, Amritsar, Faridkot, Jalandhar and Ludhiana bird clubs, and Jagriti Samiti Nangal, the bird count at Ropar and Kanjli wetlands had marginally gone up contrary to a dip at other four wetlands.

“Every year, lakhs of winged guests from Siberia, Russia, Kazakhstan and other cold regions start arriving at the bird sanctuaries from mid-October up to December as lakes get frozen in their native regions. These stay here till March, only to take a long flight back,” said Gitanjali Kanwar, coordinator, Aquatic Biodiversity, WWF-India.

Principal Chief Conservator of Forests and Wildlife Kuldip Kumar said the sightings of rare birds like common shelduck in Ropar and common merganser in Harike had added to the charm. “The change in climatic conditions across the globe and late winter arrival is a major reason for fall in the bird count. However, we are hopeful that the count will go up next year.”