State government had set up dedicated 24x7 control room numbers to assist the people from Punjab, stuck in Ukraine 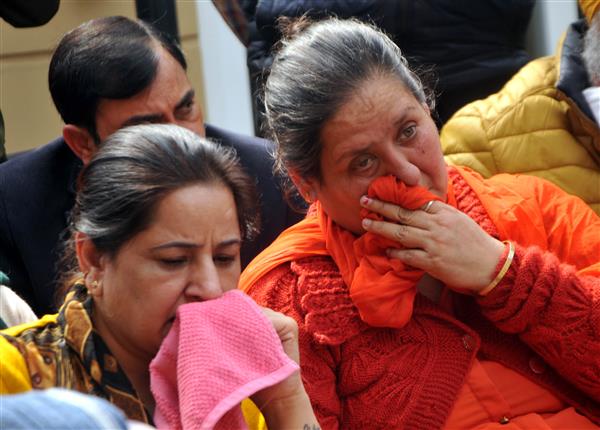 Parents of children studying in Ukraine break down during a meeting with MP Gurjeet Aujla at his residence in Amritsar on Monday. Photo: Vishal Kumar

Families of over 500 people, including students stranded in war-torn Ukraine have shared their details with the authorities in Punjab for their evacuation, officials said on Monday.

These details, shared with the respective district administrations, were sent to the central government to ensure their evacuation, they said.

He also asked the Punjab government to appoint a nodal officer who can coordinate with the central government and the Ministry of External Affairs for the speedy return of students.

Although the Punjab government has set up a dedicated phone number, it is yet to appoint any nodal officer for the purpose, Amarinder Singh said in a statement.

Sharing parents’ anxiety and concern with the Prime Minister, the former Punjab CM Amarinder Singh said they were feeling worried, as reports from Ukraine were coming in, showing the desperate plight of students stranded in bunkers and metro-stations in harsh weather conditions and without any food.

He appreciated the government of India’s efforts in bringing back people and hoped that the efforts will be further jacked up.

“I understand the extremely difficult situation prevailing in Ukraine but I am confident that our government will bring back every single student and person safely,” he said.

Congress MP Manish Tewari too wrote to PM Modi to use his good offices to bring back Indians stuck in the war-torn country.

“Heart-wrenching videos of young students’ plight circulating on social media show that our boys and girls were being brutalised on the Ukrainian-Polish border,” Tewari wrote.

“I know it is a difficult situation but I am given to understand that 20,000-30,000 of our young boys and girls are still stuck in various parts of Ukraine and a substantial number of them are stuck in eastern Ukraine that is close to the Russian border,” he said.

He urged the PM to use his good offices with all the neighbours of Ukraine, including Russia, to ensure that “our children are brought home safely”.

The Congress leader further urged PM Modi to advise the ministers concerned who are overseeing the evacuation to redouble both the effort and resources to bring every Indian back from Ukraine safely.

The Punjab government had set up dedicated 24x7 control room numbers to assist the people from Punjab, stuck in Ukraine.

Meanwhile, distressed families of stranded students urged the government to speed up the evacuation process.

Punjab’s Mansa district resident Balwinder Sharma, whose daughter Anshika Sharma is stranded in Ukraine, demanded from the government to safely evacuate students from the war-torn country.

He said his daughter, a first-year MBBS student, was staying in a bunker of the medical college hostel at Kharkiv.

“Students who are stuck there have limited supply of ration and no help has so far reached them,” said Sharma whose daughter went to Ukraine in November.

Vijay Nandgarhia, another Mansa resident, also pleaded with the government to ensure the safe return of his son Mukesh Singla pursuing MBBS in Ukraine.