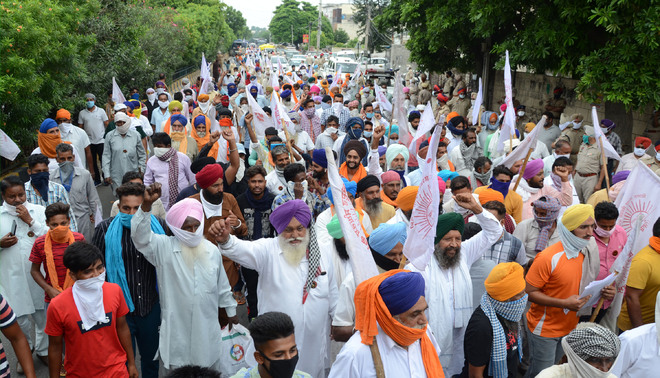 Farmers block the traffic and gherao during protest in Jalandhar. Tribune file Photo

The rollout of the Agriculture Loan Waiver and Debt Relief Scheme by the Capt Amarinder Singh government, a key poll promise of the Congress, may give the party bragging rights going into the 2022 elections, but its scope has been limited in terms of lifting farmers out of the debt trap.

Almost two years since the Punjab Government completed the loan waiver of Rs 4,603 crore to the targeted 5,61,390 farmers, most of them have once again taken loans and remain trapped in the cycle. The state’s per capita farmer indebtedness continues to be amongst the highest at Rs 80,000-1 lakh crore, as does the farmer suicide rate. Since 2017, after the scheme was announced and later rolled out, nearly 1,700 have ended their lives.

It aims at providing loan waiver up to Rs2 lakh for small and marginal farmers, those who have taken loan from public sector banks, cooperative institutions, commercial banks. Initially, the scheme was to cover 10.25 lakh farmers with Rs10,000 crore outlay

Even as the government looks at expanding the scheme to landless farmers and agriculture labourers, questions are being raised about its efficacy. Farmers and farm union leaders, who are now fighting a different battle (three farm laws), and economists are unanimous in their opinion that the scheme has facilitated only limited relief. They say though it did benefit the small and marginal farmers, it may not be a decisive factor when they vote.

“The state’s agriculture economy is at the risk of being overtaken by corporates. Farmers will vote on the basis of the contribution of each politician to their struggle. The rural indebtedness of farmers is up by 12 per cent in the past two years. The scheme helped marginal farmers initially, but the government should have a broader approach and policy intervention to effectively deal with issues concerning farmers’ income,” says Jagmohan Singh, general secretary, BKU Ekta Dakaunda.

Farmers rue there is no end to their economic woes. “Sixteen farmers in my village got the loan waiver, but now they have again taken loans and find it difficult to repay,” says Gurbakshish Singh of Bimber village near Nabha.

Almost 40 per cent of the loans taken by farmers are from arhtiyas and they have not been included in the scheme. A 15-year-old from Markhai village in Ferozepur, whose father died by suicide because of inability to repay the moneylender, says the government needs to do much more to get farmers out of the debt trap and ease the process of granting relief. His family had not got the compensation as his father was a landless farmer, cultivating on land he had taken on lease, and the loan was taken from a non-institutional source.

RS Ghuman, economist and ex-chairman of Punjab's MSP committee, says the debt waiver scheme did meet the crisis in rural economy, though its scope was limited as after getting their loans cleared, farmers who face shortage of capital have again taken loans.

“What is needed is a comprehensive agriculture policy with targeted interventions for small and marginal farmers and those caught in debt trap. The data compiled by three universities (PAU, GNDU and Punjabi University) shows that over 75 per cent suicides were because of inability to repay loans. But banks are pushing for more loans to farmers, which only adds to the debt burden. A broader policy outreach is needed to take them out of the debt trap,” he says.