Slam Centre over non-implementation of assurances 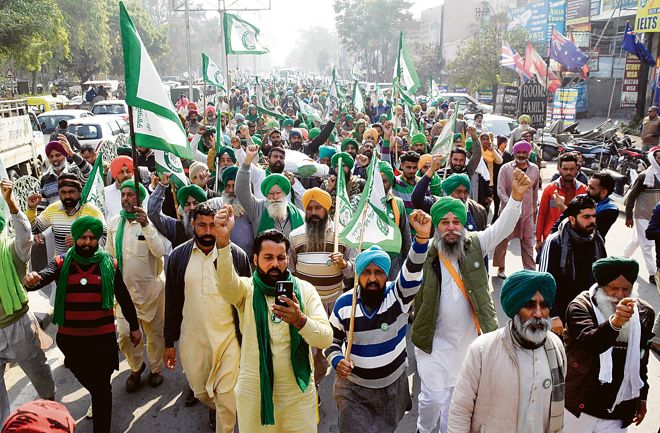 Farmers take out a protest march in Bathinda on Monday.

Farm unions across the state held a protest against the non-fulfillment of promises made to them by the Centre at the time of withdrawal of the three farm laws in November last year. The call for observing a “vishwasghat diwas” was given by the Samyukt Kisan Morcha.

Farmers burnt effigies of Prime Minister Narendra Modi in 16 districts. Demonstrations were held in front of 12 DC offices and 10 SDM offices. The unions claimed that more than 1 lakh farmers, women and farm labourers, participated in the agitation.

The protesters strongly condemned the breach of trust by the Government of India. They alleged that the Centre vide their letter dated December 9, 2021, had agreed and promised to constitute a committee to ensure MSP for all crops as per the recommendations of the Swaminathan Commission and strengthening of public distribution system. Other demands included removal and arrest of Union Minister of State Ajay Mishra Teni (whose son is accused of crushing four farmers and injuring others by running over the vehicles under a pre-planned conspiracy in Lakhimpur Kheri) and withdrawal of all cases slapped against farmers and labourers in Delhi, Haryana, Chandigarh, UP and other states during farmers’ stir, compensation and government jobs to the families of more than 700 farmers who lost their lives, farmer and labour friendly amendments in the Electricity Amendment Bill.

All these demands were agreed to be implemented within a month, however, the Centre has been running away and adopting a casual attitude, said farm leaders.

Meanwhile, farmers under the banner of BKU Ekta Ugrahan today burnt an effigy of the Prime Minister to mark ‘vishwasghat diwas’ (betrayal day) at Hanuman Chowk in Bathinda. The protesters submitted a memorandum to the Deputy Commissioner. Shingara Singh Mann of BKU Ekta Ugrahan said their demands have not been accepted so far.

In Fatehgarh Sahib, rift among the farm unions came to the fore as different associations burnt effigies separately. Farmers belonging to BKU Ekta Ugrahan held a protest in front of the DC office. Later, members of other factions started their agitation.