Members talked about how the central law is about facilitating corporate farming and resource-grabbing: SKM 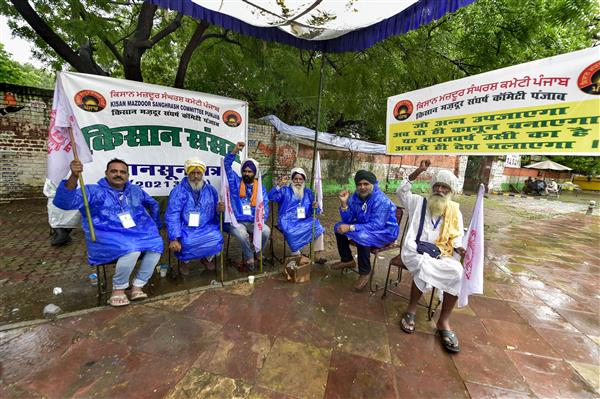 Farmers during their Kisan Sansad at Jantar Mantar in New Delhi, on Wednesday, July 28, 2021. PTI

The fifth day of the Kisan Sansad that is running parallel to the Monsoon session of Parliament saw farmers deliberating on the Contract Farming Act, 2020, according to a statement by the Samyukt Kisan Morcha (SKM) on Wednesday.

Saying that the act was brought in by the government in “an undemocratic and unconstitutional manner” last year, the umbrella body of over 40 farmer unions said, “This is a legal framework to facilitate corporate farming and resource grabbing.”

There were a total of three Kisan Sansad sessions held through the day that were moderated by farmer leaders from different states.

Among the major topics of discussion were threat to food security and environmental degradation caused by contract farming.

“Several members shared their personal experiences of contract farming like rejection of produce by companies under one garb or the other after an entire season’s toil by the farmer.

“They talked about how the central law is about facilitating corporate farming and resource-grabbing. The potential threat to food security from contract farming was highlighted, in addition to environmental degradation,” the SKM said.

It added that the debate on the Contract Farming Act would continue the following day.

The Kisan Sansad is part of the latest strategy of the farmers who have been protesting against the Centre’s three contentious farm laws at multiple Delhi borders since November last year.

The farmers have expressed fear over the laws eliminating the Minimum Support Price system, and leaving them at the mercy of the big corporations.

Over 10 rounds of talks with the government that has been projecting the laws as major agricultural reforms have failed to break the deadlock between the two parties.

As part of these Kisan Sansad sessions, 200 farmers from the protest sites participate in a mock Parliament session at Jantar Mantar during which issues concerning the farming community are discussed.

The SKM also expressed its concerns over the Indian Marine Fisheries Bill, 2021 that is listed for tabling in Parliament in the current session.

“Fisher unions are pointing out how the Bill facilitates the takeover of ocean’s fishing resources by corporates, and envisages a registration and licensing process extremely difficult for traditional fishing communities and impinges on their fundamental right to life and livelihood,” the SKM said.

It added that the drafting of the Bill has been “non-participatory”, and “no traditional fishers were consulted or included in the process”.

Hailing the farmers’ perseverance to continue their fight through the rains, the farm union body said that the protesters have been agitating at the Delhi borders as well as at Jantar Mantar “cheerfully and without complaints”.

However, it added, uneven and inadequate showers at the onset of monsoon this year had led to “significant deficit sowing in several states in the country”, and claimed that farmers hadn’t received any aid from the government authorities. PTI