Say won’t relent till Centre addresses their concerns over Bills 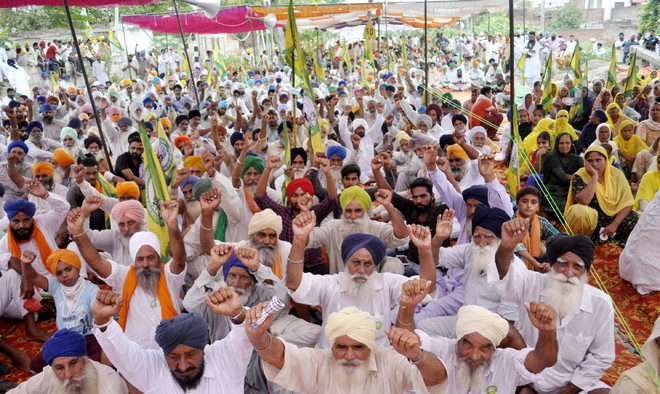 Farmers block a railway track during a protest against the NDA government in Nabha. Photo: Rajesh Sachar

BKU leaders said they would resume the ‘rail roko’ stir from October 1 onwards for an indefinite period. Scores of farmers blocked the Bathinda-Delhi railway line and raised slogans against the Union Government and the SAD over their alleged failure to protect the interests of the farming community in the state.

“We have ended the rail roko agitation today, but we have decided to resume it on October 1 for an indefinite period. Protesters would not be influenced by the political drama being played out to gain mileage out of the farmers’ misery. The agitation against the Bills will continue until the government relents and addresses the concerns of farmers,” said Ram Singh Bhaini Bagha, president, BKU (Ekta Ugrahan).

“New farm Bills would prevent farmers from getting the MSP for their agricultural produce. The basic structure of mandi board will be altered completely and procurement by the government agencies will not take place. Besides, private players will control the farm sector and procure produce by fixing their own rates,” he further said.