Farmers firm: Won’t back off, even if told by courts : The Tribune India

Farmers firm: Won’t back off, even if told by courts 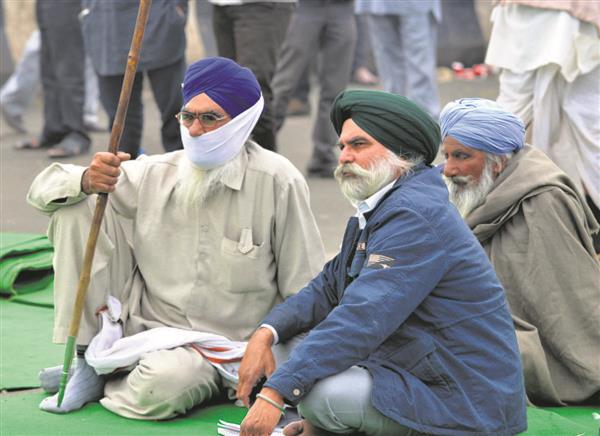 Farmers during a protest at the Ghazipur -Delhi border. Photo: Mukesh Aggarwal

Agitating farmers today said they would not back down from legitimate protests against the farm laws, even if the court tells them to. After a meeting with their legal representatives here, farm union representatives said they would only implead in the Supreme Court in the pending petitions seeking removal of protesters from Delhi borders and not in any matter regarding the constitutionality of the farm laws.

Another suicide at Tikri

New Delhi: A young farmer from Fatehgarh Sahib Amrinder Singh died by consuming poison at the Singhu border on Saturday. Paramjit Singh of the Sanyukta Kisan Morcha said Amrinder was a resident of Machrain Kalan in Fatehgarh Sahib district. He died at FIMS, Bahalgarh, Sonepat. TNS

The Supreme Court had in mid-December allowed eight farm unions to implead in the petition challenging their protests on grounds of Covid-related issues. The farm unions said these unions would go to the court on Monday in the pending case.

“The eight farm unions which are already part of the case and have been impleaded in the matter of protests by farmers will go to the SC on January 11. The issue of constitutionality is not even before the SC and we will not become party to it. We have consulted our lawyers,” Darshan Pal, one of the union leaders said on a day the Congress threw its weight behind the protesters, daring the PM to quit if he could not rescind the laws.

Congress chief spokesperson Randeep Surjewala urged the SC to introspect. “The Modi government was elected by the people, not the SC. It is answerable to the people for its decisions and not to the Supreme Court. The responsibility of making and annulling the laws is that of Parliament. I would urge the SC to ask itself why the farmers are so unwilling to approach it? Why does the government want the SC to solve all contentious issues, from the CAA and the National Register of Citizens to farm laws,” he asked. Announcing protests on January 15 in solidarity with the farmers, Surjewala said “Jan Andolans” would be held at all state headquarters and the day observed as Kisan Adhikar Diwas. Swaraj Abhiyan chief Yogendra Yadav also slammed the government for suggesting that the farmers should go to the SC.

“The SC has said earlier that it will not intervene... The government is dodging dialogue,” he claimed. “Bring whatever orders you wish. We are not going anywhere until you repeal the laws,” said a resolute BKU leader Rakesh Tikait.