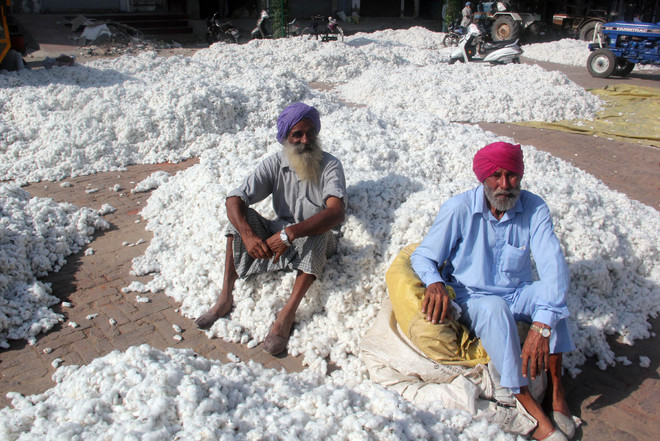 Cotton farmers at a grain market in Bathinda. Tribune photo

Cotton farmers in the Malwa region are upset over being forced to sell the produce way below the minimum support price (MSP) to private players. Though the Cotton Corporation of India (CCI) had decided to start procurement at 21 centres in the state from October 1, it has not bought even a single bale in the past three days due to “high moisture content and low quality”.

Talking to The Tribune, CCI General Manager Neeraj Kumar said, “Initial pickings of cotton farmers are not that rich in quality with moisture content varying from 15 to 22 per cent against the CCI’s permissible limit of 8 to 12 per cent. We have fixed a certain criteria and can only procure cotton that adheres to those quality parameters. We have been recommending farmers to dry the cotton properly and then bring it to the market. In its current shape, the CCI would not be able to procure the produce in the first week of October.”

With the CCI not starting procurement in mandis, it is the private players who have been calling the shots and procuring cotton as per their convenience and rates.

Sukhwinder Singh Bhokhra, a farmer from the Goniana block of Bathinda district, said, “I had to sell fine quality cotton picked from fields around five days ago for Rs 4,700 per quintal against the MSP of Rs 5,725. Last year, I had sold cotton for Rs 4,500. It is surprising that the government fixes the MSP for farm produce, but it does not have a proper mechanism in place to facilitate even remunerative prices to the farmers.”

Another farmer Gurpal Singh from Nasibpura village in Talwandi Sabo had to sell the produce for Rs 3,500 per quintal. An official of the Market Committee said cotton was sold between Rs 3,500 and Rs 4,950 per quintal in the district on Saturday. A factory owner said they could not procure the produce at government rates as the quality was not good and the moisture content was high.