Cannot be de-linked from the ill-advised unitary and dictatorial tendencies in the country: Akali chief Sukhbir Badal 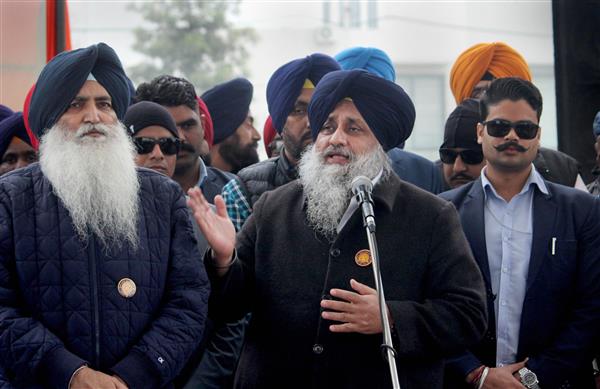 The Akali Dal on Monday said the crisis over the new farm laws wouldn’t have arisen had the BJP-led government followed a federal approach, claiming that the country has seen a “dangerous slide” into an increasingly autocratic system under it.

“The alarming crisis following the passage of three anti-farmer Acts would not have arisen if the government had followed a federal approach through consultation, conciliation and consensus,” Shiromani Akali Dal chief Sukhbir Singh Badal said in a statement.

“The farmers’ crisis cannot be de-linked from the ill-advised unitary and dictatorial tendencies in the country. The problem could have been averted through an approach based on federal principles,” said Badal after offering prayers at the Akal Takht Sahib complex.

Badal lamented that under the BJP-led government at the Centre, “the country has seen a dangerous slide into an increasingly autocratic and unitary system with growing centralisation of power in a few hands”.

He said his party would work in tandem with like-minded regional and national parties to make India a genuine federal country.

“This alone is the ultimate and durable guarantee against the social, political and economic turmoil which the country has been witnessing in recent years,” he said.

He reiterated that his party fully supports the farmers’ demand for total revocation of the farm laws.

Badal alleged that the NDA government had “violated” the principle of federalism and “usurped” the powers of the states to institute three laws on agriculture which was a state subject.

The government is working “against the interests of the states by concentrating all power in its hands”, Badal said, adding that the SAD was the first to talk about the need for a true federal structure.

“Then we were branded as separatists. However, today all the states are in favour of a federal structure and feel that if this had been in place the farmers would not have been agitating for their rights,” he said.

Things had taken such a turn that if one was in agreement with the central government, he was a ‘desh bhakt’ (nationalist) but if one spoke out against it, he was branded a ‘desh drohi’ (traitor), he alleged. --- PTI