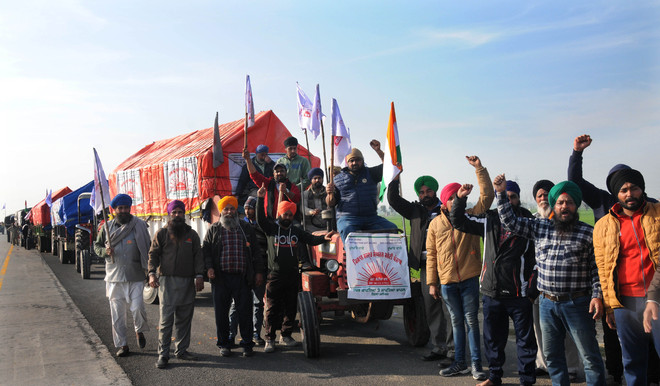 Scores of farmers from Punjab are heading back to the Ghazipur and Singhu borders after having returned home from the tractor parade.

Amarjot Singh, youth wing president (Jalandhar), BKU (Rajewal), and Kulwinder Singh Machiana, its general secretary, were at Singhu a few days ago. After holding meetings with farmers here and dispelling rumours, they plan to go back soon. A ‘jatha’ of youths from Thatha Purana village in Sultanpur Lodhi headed out to Singhu amid reports of a police build-up at Ghazipur.

“Youths from Sarhali, Jandiala, Nakodar and other blocks are preparing to return to protest sites. Some have already started going back, others will go in a couple of days. The attempt to evict BKU leader Rakesh Tikait forcibly has angered farmers,” said Amarjot.

Machiana, who was holding the stage of the Sanyukt Kisan Morcha a few days ago, said, “Some of us have been deputed to dispel fake news about the agitation. Any attempt to disrupt our honest stir will fail. We are going village to village to speak to farmers about the real situation and will head back to Delhi borders on February 1. All those who came back will return.”

From Thatta Purana in Sultanpur Lodhi, an 11-member jatha headed to Singhu on Thursday. Surinderjit Singh, a village resident, said, “In view of the rumours being spread about the tractor parade, it is important we head back to Singhu.”

Dr Baljit Singh, national president of the Jai Jawan Jai Kisan Party floated by farmers youths, said, “Over 15 to 20 trailers left for Delhi borders from Patiala a few days ago. Everyone is keen to return to the protest site. There is anger among people for the way farmers have been blamed for the Red Fort incident. Everyone wants to head back and lend support to the movement.”

At least 50 tractor-trailers of the Kisan Mazdoor Sangharsh Committee left for Singhu today.

“After we saw at Singhu last night, many of us couldn’t sleep. Leaders called us to come soon as they need people there. We are going to strengthen the movement,” say villagers.

Ex-servicemen on faST in Gidderbaha

Muktsar: Former servicemen on Saturday observed a hunger strike in Gidderbaha in protest against the police action on farmers in Delhi. Kirpal Singh, president, ex-servicemen cell, Gidderbaha unit, said, “We have observed a hunger strike today against the lathicharge on farmers in Delhi.” Meanwhile, some advocates also lent support.