Agitation at Jantar Mantar on Aug 22 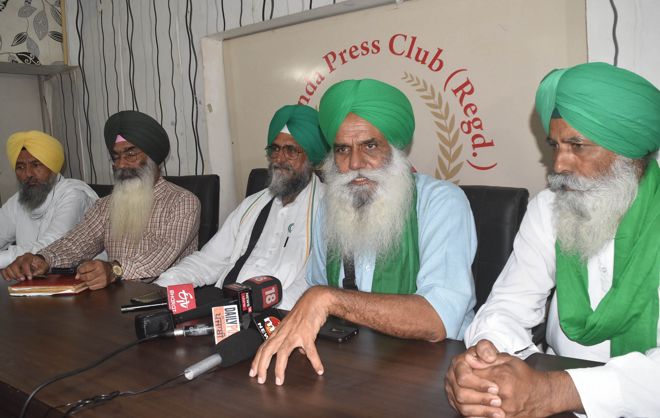 Rejecting the new committee on the MSP formed by the Union Government, the BKU Ekta (Sidhupur) today announced that farmer unions under the banner of the Samyukt Kisan Morcha (SKM) will stage a one-day protest at Jantar Mantar in Delhi on August 22.

State president Jagjit Singh Dallewal, addressing a press conference here, also announced that the unions would start an agitation from August 3 against the state government and block roads as the government had failed to fulfil its promises made to farmers.

Dallewal said, “The SKM (non-political) is aware that the Centre is not serious on the MSP guarantee Bill and it has showed its intention by forming an MSP committee without farmer leaders. We asked the Union government to share the committee details and if the morcha found it satisfactory, then three names of leaders would be forwarded to the government. But the government issued a notification on July 18 regarding the MSP committee. It has not mentioned anywhere regarding the MSP guarantee law.”

Dallewal added, “Those who have advocated three agricultural laws have been made part of the committee. The committee cannot be trusted and has been formed to protect the interests of corporate houses.”

BKU (Sidhupur) state general secretary Kaka Singh Kotra said, “At a meeting held between the SKM (non-political) and CM Bhagwant Mann on April 17, it was promised that the outstanding sugarcane payment to farmers would be made before July 16 but it has not been cleared. We will hold a state-level agitation at three locations, one each in Malwa, Majha and Doaba. National highways would be blocked as part of the protest on August 3.”