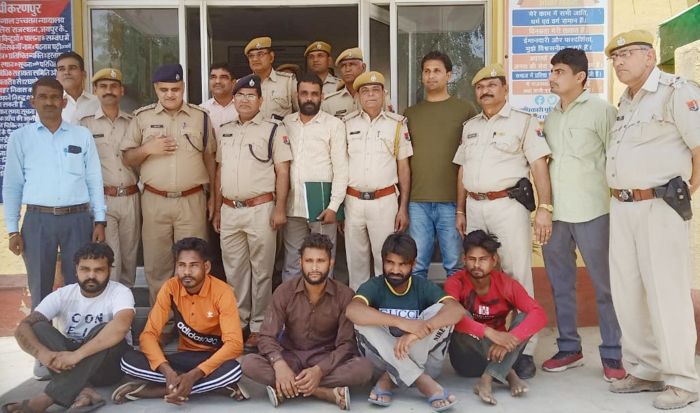 The accused in police custody in Sriganganagar on Thursday.

Five persons, including two from Punjab, were arrested with packets containing 6.5 kg heroin dropped by Pakistan drones in Sriganganagar.

The two suspects — Jagjit Singh, alias Faridewala, of Kala and Harpreet Singh, alias Harry, of Mallanwala in Ferozepur — were found carrying over 1 kg heroin in their car. A sum of Rs 2.5 lakh was also recovered from them.

The action followed the arrest of Veerpal Singh, alias Veeru, of Chak 2-O (B) and Surinder Singh of Khanuwali village for possessing 5.328 gm heroin. They had gone to a field to collect six packets of heroin, which were dropped by a drone from Pakistan.

According to police sources, the drone took off twice from the Pakistan side near BSF’s Shekhsarpal border post. Both times, it went back after dropping packets (heroin).

CID zonal officer Diksha Kamra said when the suspects tried to pick up the packets in the fields of Sukhdev Singh Ramana and Prithvi Bishnoi in Chak 12-F(A) village, some dogs started barking. While two suspects were caught from the spot, the others fled in the car.

Investigation indicated a suspect, Sona Singh, who was hiding in her in-laws’ house at Koni village, had given the car to the two suspects from Punjab. The car was intercepted near Chak 3-C village intersection. Jagjit and Harpreet were arrested and 1 kg heroin and cash were recovered.