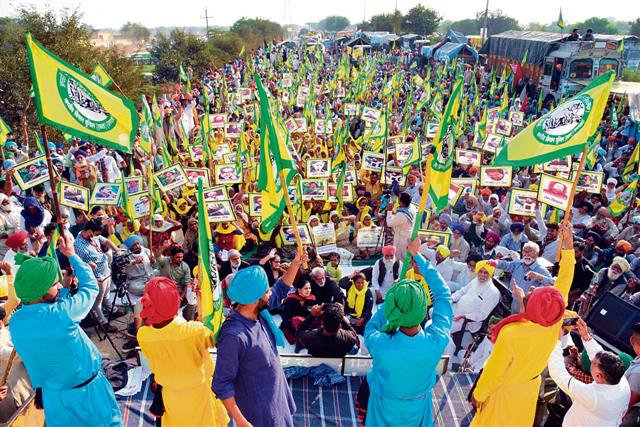 Flags and badges of various farm unions have become a new craze, not just in India but abroad too. By a conservative assessment, over 5 lakh flags and 10 lakh badges of different farmer unions have been sold in the past six months.

The trend of flags and badges started picking up in June when the unions started their campaign against the farm laws. Jhanda Singh Jaithuke, senior vice-president of BKU (Ugrahan), said: “In the past six months, we have sold 1.30 lakh flags and 2.11 lakh badges. A flag is sold for Rs 30 and badge for Rs 10.” Same is with other organisations, such as BKU (Dakaunda), which has sold 28,000 flags and 50,000 badges.

Balwant Uppali, press secretary of the union, said: “Now, it is a trend to hoist kisan union flags atop their houses and youngsters proudly wear the badges. We have never seen this before.”

A farmer leader said the flags give a distinct identity to people. Police and other officials don’t trouble, if the flag is hoisted on the vehicle. The trend is equally picking up abroad also. “Last month, we sent hundreds of flags and badges to Canada,” Uppali said. Large consignments of flags are being sent to Europe and North America by farmer organisations and local businessmen. “Recently, a group of Punjabis settled in Surrey asked me to send 20 flags and badges,” says Varinder Diwana, a bookseller from Diwana village in Barnala.

Kushpreet Kaur, an online bookseller, said an organisation called the Sikh Community of Greater Gelong in Australia had placed a large order of badges and flags. “We are regularly getting such queries and people are asking for small orders, which are not viable to send. So we asked them to get them printed in their respective countries,” she said.