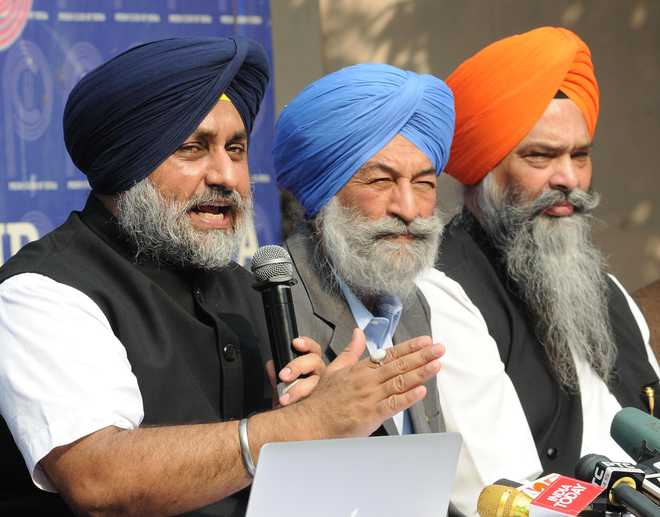 The new Panthic equations and political developments, with the Damdami Taksal showing allegiance to the anti-Badal faction and senior SAD leaders showing dissent, may result in Sukhbir Badal-led Akali Dal losing its grip on the SGPC.

In the recently held programme of the Delhi Sikh Gurdwara Management Committee (DSGMC) headed by dissident Akalis, who formed a new front, SAD (Delhi state), after getting separated from the Sukhbir-led SAD, witnessed a surprised entry of Damdami Taksal head Harnam Singh Khalsa. He showed solidarity with the Delhi Sikh body chief, Harmeet Singh Kalka, who had torpedoed the supremacy of the SAD in the last DSGMC elections. Khalsa indirectly blamed the Badals for damaging the sanctity of the Sikh ethics, principles and the Panthic cause.

Harnam Singh Khalsa’s participation in an event of the Delhi Sikh body never denoted that the Damdami Taksal has registered its dissent from the SAD. The Panth has immense faith in the SAD. We are strategising to strengthen it. — Daljit Singh Cheema, SAD spokesperson

Meanwhile, SGPC general secretary Karnail Singh Panjoli said, “The problem was with the existing SAD leadership under whose tutelage the party’s political and religious graph has diminished since 2015 in the backdrop of controversial flip-flop exoneration decision of the Sirsa dera cult, followed by a series of sacrilege incidents, particularly in the Barghari and Behbal Kalan police firings and the appointment of top cops. I believe that the SAD leadership should quit their positions voluntarily before Akal Takht. A new leadership should be constituted under the umbrella of Akal Takht to save the SAD and the SGPC.”

SAD spokesperson Daljit Singh Cheema, however, said the leadership could not be changed on an individual’s opinion. At present, the SAD enjoyed ‘absolute’ majority in the SGPC with the support of Sant Samaj, Damdami Taksal and its core group. Of the 191 members, the SAD has around 160.

Nonetheless, SGPC member Bibi Kiranjot Kaur believed that the ‘monopoly’ of the Badals in the SAD and the SGPC had certainly been challenged, especially with the indication of its main loyalists like Dakha MLA Manpreet Singh Ayali’s refusal to acknowledge the party’s choice for Presidential polls. “It’s yet to see if Damdami Taksal-sponsored SGPC members support their leader’s change of equations or not,” she added.

Constitutionally, the SGPC polls are held after every five years, with the last one being conducted in 2011. In December 2011, the Punjab and Haryana HC had nullified the polls as the Sehajdhari Sikhs were not allowed to vote. In 2016, the SC reinstated the House of 2011. Since then the president, besides the 11-member executive committee are nominated to the General House either by raising of hands or through ballot.