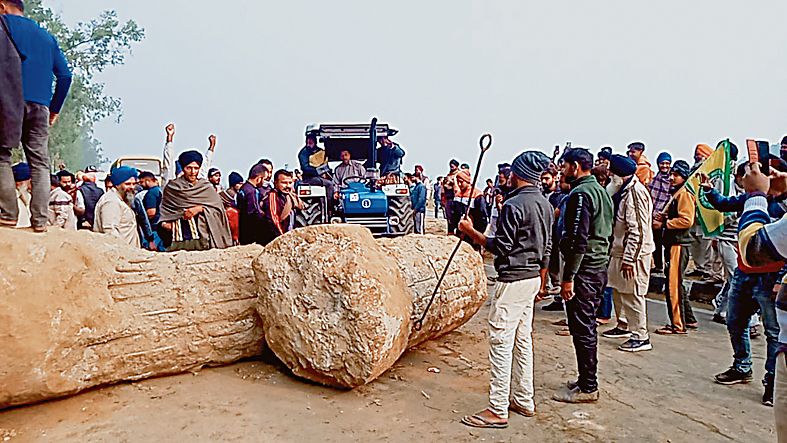 State farmers today foiled another attempt of the Haryana Government to prevent them from going to New Delhi to participate in the protest against the Central agriculture laws.

Last night, the Haryana Government reportedly tried to block the national highway (NH) at the Punjab-Haryana border near Khanauri by placing big stones, but locals removed all before the arrival of the state farmers on tractor trailers.

After getting the information about the blockade, announcements were made from the public address system of gurdwaras to reach at the border with tractors to remove it. A large number of farmers from nearby villages with their tractors reached the spot. Soon, they cleared the national highway of big stones. They also raised slogans against the Haryana and Central governments.

We removed big stones placed by the authorities to block the NH to prevent farmers from reaching Delhi. After seeing the number of farmers swell, Jind policemen didn’t interfere and went back. —Rashpal Singh, A farmer

“Last month, farmers removed all barricades from various parts of Haryana despite stiff resistance from the state government. On Saturday morning, we removed many big stones, which were placed by the authorities to block the NH to prevent farmers from reaching New Delhi. After seeing the number of farmers swell, Jind cops didn’t interfere and went back,” said Rashpal Singh, a farmer.

Gagan Sharma, a BKU (Ugrahan) member from Moonak, said today more farmers went to Delhi from their area. “In coming days, more farmers will join protesters in Delhi to pressure the Central Government to roll back the farm laws,” said Sharma.

The SHO of the Garhi police station in Jind, Bijender Singh, said they did not block any road, but NHAI employees, who were involved in the transportation of stones.