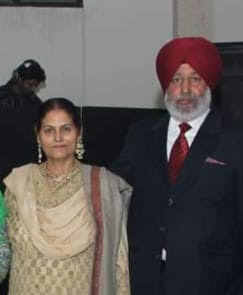 An elderly couple was hacked to death in posh Bhai Randhir Singh Nagar here on Wednesday night. The police suspect the role of some known person as the accused made a friendly entry into the house.

The deceased were identified as Sukhdev Singh Lotey (66), a retired income tax officer, and his wife Gurmeet Kaur (64). The couple lived alone in the house as their two sons were settled abroad. Their daughter lives in the same locality. The house is located opposite Baba Isher Singh Public School in D Block. The police have recovered the CCTV footage of the suspect, but it was grainy due to darkness.

The couple’s married daughter, Rimpy, said she was talking to her father over the phone last night, when the doorbell rang and her father asked someone to come inside. “Within a minute, an argument started with the visitor and I heard his shrieks before the phone was hung up. Around 10 minutes later, a neighbour called me up to say my parents were lying dead in the house,” said their daughter.

DCP SPS Dhindsa said: “A suspect was captured on the CCTV and we are trying to identify him.” Meanwhile, PCC chief Amrinder Singh Raja Warring has said the AAP government has failed to ensure safety of people.