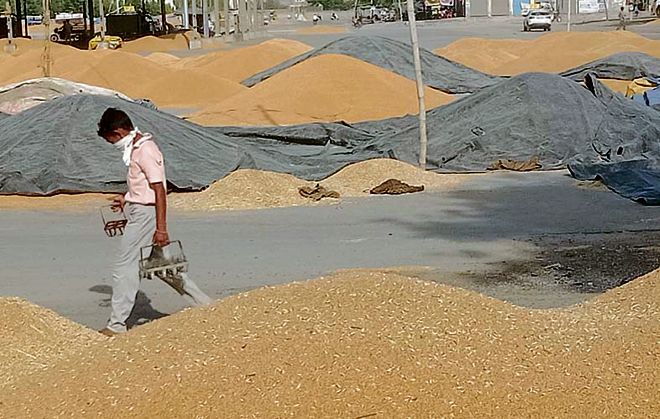 Buyers are instead heading to UP, Rajasthan and Madhya Pradesh, where taxes are lower by 6 per cent.

Punjab farmers could lose out on a big opportunity for getting higher than the MSP for this year’s wheat crop if the government does not waive the market development fee (MDF) and rural development fee (RDF) imposed on private traders buying wheat.

Information gathered by The Tribune from some of the major mandis in the state has shown that several agri corporates, which initially started wheat purchase, have now opted out. They are instead going to Uttar Pradesh, Rajasthan and Madhya Pradesh to buy wheat, where the cost is less by almost 6 per cent.

Mahinder Krishan Chand Arora, a commission agent in Rajpura, said even before the government purchase had begun, wheat from last year was being purchased by private traders and corporates at Rs 2,250-Rs 2,300 per quintal.

“But with fresh arrivals, the private purchase is only at Rs 2,020 per quintal, just Rs 5 per quintal more than the MSP. Some wheat exporters from Delhi had initially bought last year’s wheat. This year, some cattle feed manufacturers, including IB Group, started buying wheat from Punjab, but later turned away because of high taxes here. They are now buying from UP,” he said.

As a result, private player there pays just Rs 20-30 per quintal over the market price.

“Last year, Punjab earned Rs 1,540 crore in taxes on wheat. This year, we are hoping to earn Rs 1,600 crore through these two taxes,” said an official of the Punjab Mandi Board. This year, MP has decided not to levy any tax on export of wheat produced there. A number of agri corporates are lining up in mandis there to purchase wheat for export, considering the huge potential in wake of Russia-Ukraine war.

Harbans Singh Rosha, president of Arhtiya Association of Khanna, said the government could use the H-forms for exempting exporters from the taxes, if it wanted farmers to get a good price for their crop and bring Punjab on the global map. “It is done for basmati exports, and can be replicated for wheat also,” he said.

Raj Sood, a commission agent in Khanna, said private purchase of wheat this year was restricted to only local flour mills, because these were exempted from paying the two taxes.