His comeback to infuse new life into SAD: Harsimrat Badal : The Tribune India

His comeback to infuse new life into SAD: Harsimrat Badal 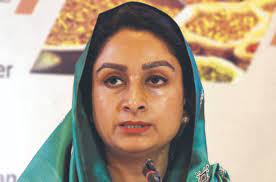 Shiromani Akali Dal MP and former Union Minister Harsimrat Kaur Badal today said bail granted to senior leader Bikram Singh Majithia would enable the party to tackle the Opposition’s propaganda and infuse a new lease of life into the outfit. She was in the city to pay obeisance at the Golden Temple.

She said the previous government misused its power and registered a false case against Majithia. “I question those parties, which played politics by implicating Majithia, under frivolous drug charges and put him behind the bars for over six months. Could drug menace be curbed during this span? Rather, it prospered. I appeal to the government to shun vendetta politics and save those who are losing their lives due to drug overdose,” she said.

Speaking on ‘rebellion’ within the SAD, the former Union Minister said, “The Centre and its agencies intend to create division among the regional party leaders with an aim to take the reins in their hands. It was the SAD first, now the SGPC is their target.”

The Centre and its agencies intend to divide regional parties. It was the SAD first, now the SGPC is their target. — Harsimrat Kaur Badal, SAD member of parliament