Sahib Singh (22) was killed with two others in fake encounter in Amritsar | It was claimed that Sahib was wanted in 500 cases of murder, kidnapping | Police failed to prove even single case 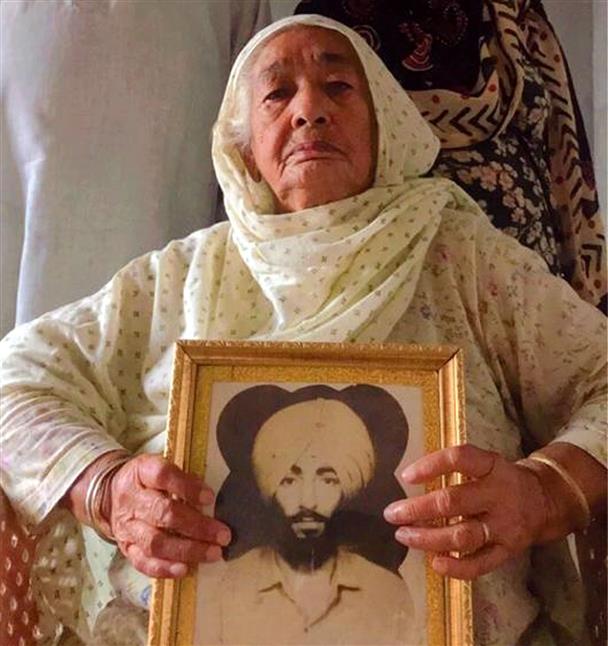 A family member of Sahib Singh at Chug village in Amritsar.

Even as a CBI court convicted two retired cops in connection with killing of three persons in an alleged fake encounter, family members of the victims are hoping for exemplary punishment for the accused.

Family members of Sahib Singh, one of the victims killed in the fake encounter, expressed satisfaction over the verdict. They hoped that the court would announce suitable punishment for the convicts.

“Sahib Singh (22) was killed with two others in a fake encounter at the Dhar Deo area here in September 1992. Later, their bodies were cremated as unclaimed,” said Sartaj Singh, brother of the deceased.

"It has been a three-decade-long wait for the family. My father Kehar Singh who had lodged a complaint with the CBI, died waiting for justice over 10 years ago," said Sartaj, a resident of Chug village here.

On Friday, the CBI court at Mohali convicted the then Sub-Inspector, Tarsem Lal, who was then posted at the CIA Majitha police district, and CIA Inspector Kishan Singh, who was the then additional SHO. The then Mehta SHO, Rajinder Singh, died during the trial.

The quantum of the sentence will be announced on August 16.

On September 14, 1992, police officials had claimed to have killed four militants facing hundreds of criminal cases, including that of murder, kidnapping and extortion. They claimed that Sahib Singh, Dalbir Singh and Balwinder Singh, all of Amritsar, had been in police custody in connection with the murder of one Bachan Singh of Udoke Kalan village. The police claimed that they were killed in cross-firing when a terrorist tried to get them released at Dhar Deo where they were going to recover arms and ammunition.

It was claimed that Sahib was Lt General of Khalistan Armed Force (KAF) and was wanted in 500 cases of murder, kidnapping and extortion.

However, the police failed to prove even a single case against them during the trial.

“The CBI court of Special Judge RK Gupta while pronouncing the judgment held that the encounter was ‘fake’ and the deceased were killed in a cold-blooded manner,” said Sarabjit Singh Verka, a human rights activist and counsel for the victims.

The police records showed the fourth person (who allegedly attacked the police party) was also killed in the encounter. In the untraced report submitted by the police, it mentioned that his identity could not be ascertained, he said.

However, during the cremation, the name of the fourth person was given as Balwant Singh. All four bodies were cremated by a cop, Bhagwant Singh of the Mehta police station. An entry in this regard was made in the register at the Durgiana cremation ground. The police also failed to produce the record of the weapons used in the alleged encounter and those allegedly recovered from them, said Verka.

CBI public prosecutor Ashok K Bagoria said it was a long fight, but justice had finally been done to the victims' families. On the orders of the Supreme Court, the CBI had registered a case in February 1997 while a chargesheet was filed in February 1999. The statements and evidence were recorded till June 2006.

It has been a three-decade-long wait for the family. My father Kehar Singh who had lodged a complaint with the CBI, died waiting for justice over 10 years ago. — Sartaj Singh, brother of Sahib Singh