How British brought knitting to Punjab : The Tribune India

It originated in Scotland in the 16th century. The technique was brought to India in the 19th century by the British and was popularised in North India by the Christian missionaries 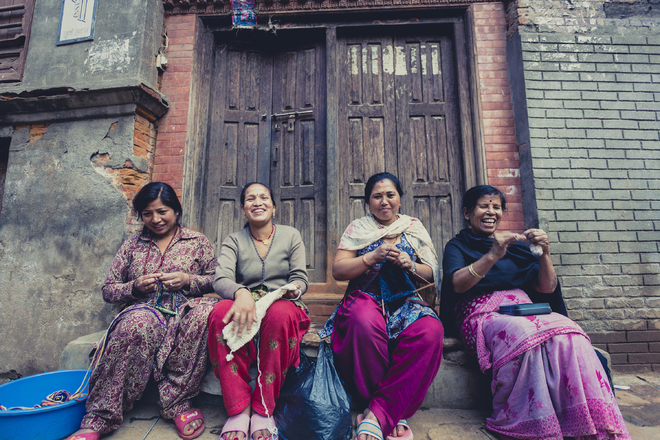 Socks were the first-ever garment that schoolgirls and women were taught to knit by wives of missionaries; Ludhiana became a major centre of production of machine-knitted woollens in the early 20th century. Istock

It is hard to believe that knitting, a favourite pastime of women in the subcontinent during winter, came to India only during the British Raj. Christian missionaries helped in spreading this skill as girls were taught knitting in schools. Gradually, it became popular among women and replaced spinning as more people starting wearing hand-knitted sweaters and socks.

Cottoning on to wool

In the 19th century, people in Punjab were not in the habit of wearing sweaters, even when it was really cold in the winter. The wealthy preferred Pashmina shawls and the poor used woollen lois — for wrapping around oneself, as well as for bedding. Baden Powell (in 1872) writes, ‘It is a remarkable fact that in the plains during the cold weather natives do not like woollen goods, it is only the poorer class that resorts to kambal or blanket. Everyone who could afford it, much prefers wearing several thicknesses of cotton cloth and coats padded with cotton wool are universally worn.’

Sir George Watt and Percy Brown also expressed similar thoughts in 1904 that, in general, cotton, rather than wool, was preferred throughout India. This has also been corroborated by other writers and gazetteers of the period. Hand-spun khaddar was thicker and warmer than mill-made cotton and women used it to stitch their suits. Men often used a khes as a wrap instead of a warm chaddar. This practice was common in Punjab even in the 1990s and might still be prevalent at certain places by the older generation.

The process of knitting is believed to have originated in Egypt and developed in the hands of a Christian sect known as the Egyptian Copts, famous for their skills. It spread with the expansion of Christianity, reaching as far as Peru in the 16th century.

There are many theories attached with knitting and its spread. According to one theory, knitting was common in Italy and Spain before it reached England. Initially it started in Shetland Island in Scotland, before spreading to England in the 16th century. The story goes that the Spanish Armada owned by the Duke of Medina-Sidonia was wrecked at Fair Isles (part of Shetland Isles). The rescued sailors were the ones to teach knitting to Fair Isles’ natives. From there it slowly spread to England. Even today, Shetland wool is considered to be of superior quality and sweaters with a lot of patterns are called Fair Isle sweaters. These have patterns that are created by use of multiple colours.

Fair Isle sweaters were, worn by Edward, Prince of Wales (later Edward VIII). He was the Captain of the Royal and Ancient Golf Club of St Andrews, Fife. In 1922, for The British Open, he wore a soft-collared white shirt, a tie with a geometric pattern, a Fair Isle sweater and plus fours. He thus started not only the fashion of this Scottish knitting style, but was also responsible for popularising plus fours (baggy knickerbockers reaching below the knee, formerly worn by men for hunting and golf). These derive the name from the fact that plus fours are cut four inches below the knee. Although this style was specifically intended for golf, yet it became fashionable for informal daywear for men in the 1920s and was specifically identified with the Prince of Wales. Some of the maharajas of Punjab as well as wealthy persons also wore these casually.

There is yet another theory where the Scots claim to have invented knitting. This is more so because the first ‘Knitting Guild’ founded in Paris, took for their patron saint, St Fiacre, the son of a Scottish King.’

Sir George Watt and Percy Brown in their catalogue of the ‘Delhi Exhibition’ of 1903 observe that ‘knitting seems to have been unknown in India prior to the efforts of the missionaries’. It was taught in most female schools and girls initially learnt to knit socks or jorab. Knitting therefore came to be known as jorab-bunnana as it was the first article that most girls learnt to knit although they were not in the habit of wearing them.

Malcom Lyall Darling (1934) writes about a school in Moga where every girl at the high school had to make a homemade garment for their annual government inspection. Darling observes that while most girls made items that were suited to village life, yet some girls made knitted socks though they rarely wore them.

Socks get mentioned in books and gazetteers from the third quarter of the 19th century onwards and it was always said that people wore white socks. Baden Powell, describing the dress of the people of Lahore and Amritsar, mentions them as wearing white stockings along with embroidered shoes. It can be presumed that since the shoes were embroidered, they were of Indian style. William Crooke, writing at the beginning of the 20th century, describes an official —‘his long white stockings mark the ‘baboo’ as clearly as short deer-skin socks distinguish Afghan.’

For a long time the socks worn in Europe were white and when these were introduced in India, most people wore only white socks. In Europe, white was the popular colour for socks though chemical dyes were introduced in 1860s. Although socks were available in India, not everyone wore them. Initially, it was only the wealthy and the western educated that used them.

We find that whenever knitting is mentioned by writers, it is always in the context of making socks. John Webster mentions that a woman in 1884 learnt to knit socks and gloves from a teacher. Baden Powell (1872) lists jails and orphanages of Punjab engaged in knitting. He lists the Mission Orphan School in Ludhiana, the Amritsar Female Orphanage, and the Female Penitentiary, Lahore, where knitting was taught.

A. Latifi, author of ‘Industrial Punjab’ (1911), writes that ‘It is a matter for congratulation that women have taken to socks making in Ludhiana as well as Wazirabad’. Writing some decades later in 1929, Darling mentions that in Ambala the wife of a missionary would visit the villages around and teach women how to knit cotton and woollen socks.

Knitting also spread to Punjab hills (now Himachal Pradesh). Missionaries have been credited with bringing knitting there as well. The Moravian Mission in Kyelang (Keylong), Lahaul, under Rev Heyde was established in 1854. Another place in Basahir (Simla district) was set up. They also set up schools at Peo (Reckong Peo) and Kyelang (Keylong) that had 10 girls and who learnt singing, sowing & knitting stockings, etc. The girls learnt how to knit gloves and socks. The mission popularised knitting among the locals, and slowly more and more girls took to it in the region. Knitted products in Lahaul even today have multi-coloured patterns, similar to the Fair Isle designs, which could possibly reflect the early influence of missionaries. The threads for the gloves and the socks were at one time handspun by the women from local wool. The colours used were grey, brown, black, or white with multi-coloured patterns.

Rise of the machines

Along with hand knitting, machine knitting was also introduced in India. As technology advanced in Europe, knitting frame developed in the late 16th century. Machine-knitted socks in the 18th century replaced those made of cloth. Earlier socks and stockings were made with cloth that had to be cut according to the shape and size of the leg. Machine-made knitted woollens were made for the first time at Sialkot. Ludhiana became a major centre of production in the early 20th century and by 1911, there were 150 machines for making socks and eight for vests in the city.

In the cities of Punjab, wealthy men had started to wear sweaters before they did so in the villages. For women, sweaters came in much later. However, around the 1920s and 1930s, as knitting gained popularity, girls and women took to knitting even though they themselves might not have worn sweaters.

Making it to magazines

Knitting magazines, books and pamphlets were available in local shops and women closely followed patterns provided in these. This enabled women to knit using European patterns and colours as even colour specifications were given. Some magazines like ‘The India Ladies Magazine’ gave patterns for knitting cardigans. As some magazines were expensive, many women copied the pattern and the instructions.

Knitting needles and wool came from England initially and were advertised in the local newspapers like The Tribune for sale of knitting yarn and needles. Many local shops also had connections abroad and got their supplies from there and advertised about it in magazines and newspapers.

Knitting was not as popular as crochet work primarily as not everyone wore sweaters. However, with time, the popularity of crochet work declined and in post-Independent Punjab, knitting became popular. Slowly, as more and more people took to wearing sweaters, knitting became a necessity as readymade sweaters were not readily available and even if they were, they were very expensive.