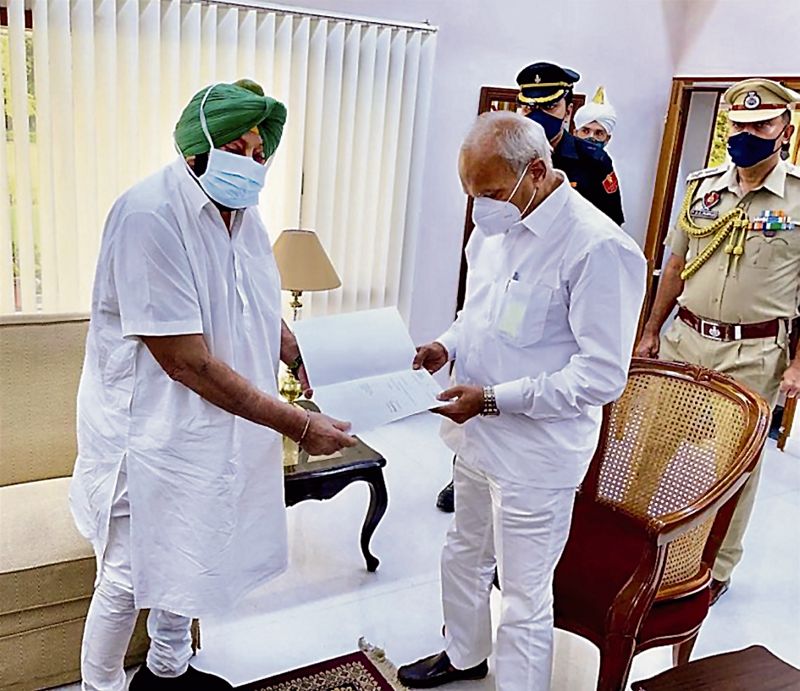 Minutes before the Congress Legislature Party (CLP) meeting, Punjab Chief Minister Capt Amarinder Singh tendered his resignation to Punjab Governor Banwarilal Purohit on Saturday. Accepting his resignation and that of his Council of Ministers, the Governor asked him to continue in office for transaction of business, till alternative arrangements were made.

Speaking to the media outside Punjab Raj Bhavan, Captain said: “I feel humiliated. In the past few months, the party high command has thrice called a meeting of Punjab MLAs. It seems that the Congress president has no faith in me. The party high command is free to pick anybody as CM”.

In a subtle message to the leadership, Capt Amarinder said: “I still have a future in politics. I will decide the next course after discussions with colleagues and close aides”, even as he asserted that he was still a member of the Congress.

Till noon, the embattled CM seemed reluctant to resign until he reportedly received a phone call from Sonia Gandhi, clearly asking him to make way for the election of a successor. Senior party leaders spent anxious moments as the CM proceeded to Raj Bhavan to tender his resignation. Sources said efforts to oust the CM began in May this year with the formation of a three-member Kharge panel to hear the grievances of party MLAs. “There was resentment against the CM for not keeping his word to the voters and his over-dependence on the bureaucracy but things did not pan out the way the leadership desired with the CM’s camp managing to hang on,” explained a senior leader.

Therefore, the leadership this time decided to take the CM by surprise, sending a message about the proposed CLP meeting late Friday night, in response to a letter by a section of MLAs seeking CM’s ouster. Calls were made to ministers and MLAs on Saturday morning to convey the high command’s wish for a change of guard.

CLP leader to be named today

A decision on new CLP leader by AICC-appointed observers will be made at a CLP meeting in Chandigarh on Sunday.

The BJP slammed the Congress as a “complete failure on all fronts”, but steered clear of criticising Capt Amarinder.