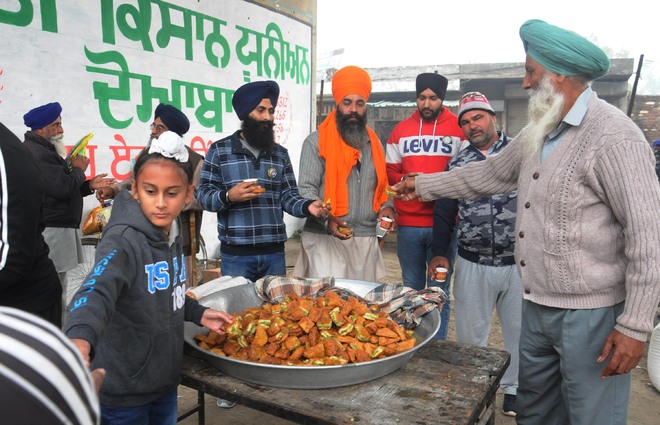 Refreshments being served to protesting farmers in Phagwara.

Hundreds of tractor-trailers, including 150 vehicles loaded with ration, 200 loud speakers and other required items along with 50 water tankers, have reached the Punjab-Haryana border near Khanauri to make required arrangements for thousands of farmers, who are likely to reach here on Thursday morning in around 1,500 more tractor-trailers.

Though the Haryana Police have put up barricades, barbed wire and stones to prevent farmers from entering their state, residents of many Haryana villages along the border, have offered help to Punjab farmers. BKU (Ugrahan) has deputed its 100 trained workers, who have experience of cooking during various protests, to cook food for their thousands of members and deputed special committees to ensure farmers are well-fed.

“We have enough ration, LPG cylinders, tents and other required items to feed thousands of protesters for next six months. We are thankful to the residents of many villages from Haryana who have come out to help us. Our members in 1,500 more trailers would reach here tomorrow,” said Bahal Singh Dhindsa, Sangrur vice-president of BKU (Ugrahan).

With required woollens, utensils and other essential items, farmers are ready for a long haul. Members of BKU (Ugrahan) from five districts, including Sangrur, Barnala, Mansa, Ludhiana and Patiala, and members of other organisations will enter Haryana through Khanauri.