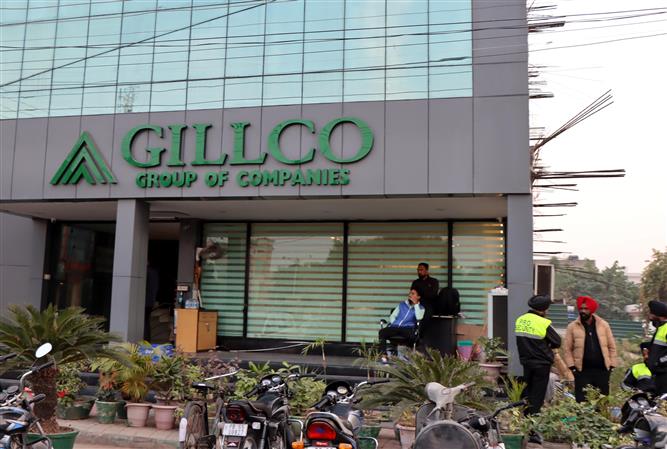 The Gillco Valley office in Kharar, which was raided on Thursday.

Earlier, he used to do real estate business in Ropar

In 2017, Gill was given a ticket by SAD but he lost the Assembly elections

In 2022 Assembly polls, the SAD gave him ticket again, but he lost to AAP’s Anmol Gagan Mann by a huge margin

The I-T Department also raided the houses of Kharar Municipal Council president Jaspreet Kaur Longia and her brother-in-law Bhupinder Singh Saini, alias Kala Saini. The raids were continuing till the filing of this report.

According to information, an I-T Department team had also raided the house of Randhir Singh Dhira, partner of Ranjit Singh Gill and former sarpanch, in Phase 9; company’s HR manager Ritika, who resides at Gillco Heights; a former employee Bajwa, who lives on Jhungian Road; and Gill’s house in Phase 7.

The I-T Department has recovered cash during the raid, but the information regarding it has not been shared with anyone.

Kala Saini, brother-in-law of Longia, an Akali leader and the Kharar civic body president, had organised a reception for the marriage of his son.

Sources said when Gurdas Maan sang a song at the marriage function, lakhs of Rs 500 and Rs 2,000 currency notes were allegedly showered on him by leaders present on the occasion. However, a video made by some of the guests at the function went viral on the social media. When the I-Tax Department received information about the function, officials were deployed to find the whereabouts of Kala Saini, Ranjit Singh Gill and Randhir Singh Dhira.

It is pertinent to mention here that Ranjit Singh Gill started the real estate work from Kharar in 1990. Earlier, he used to do real estate business in Ropar. In 2017, Gill was given a ticket by the SAD in place of Jathedar Ujagar Singh Badali, but he lost the Assembly elections. In the 2022 Assembly elections, the SAD had given him a ticket again, but he lost to Aam Aadmi Party candidate Anmol Gagan Mann by a huge margin.

Sleuths of the I-T Department also raided the office of Oxford Street builder, located on the Zirakpur-Ambala Highway, on Thursday morning. According to sources, an I-Tax Department team had reached the builder’s office at around 5 am in the morning.

During the investigation, the CRPF personnel were made to stand outside places where the I-T raids were conducted. No one was allowed to enter the raiding spots. Not only this, media personnel were also prevented from covering these spots.