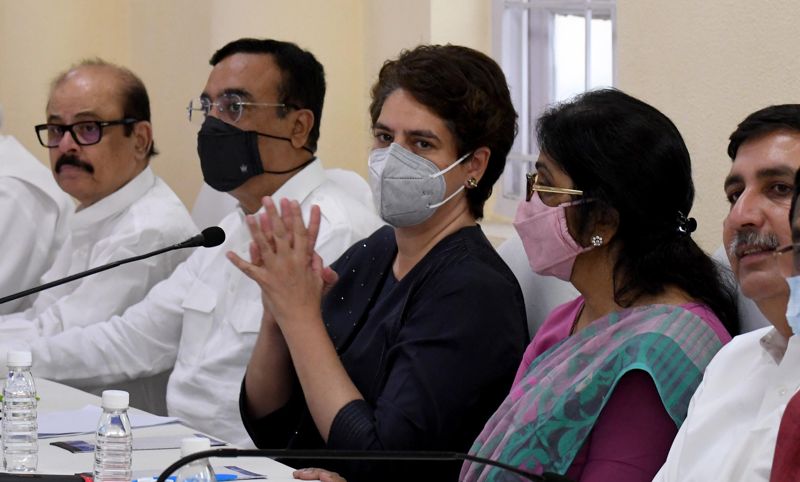 Priyanka Gandhi and others at the CWC meeting. Manas Ranjan Bhui

Congress president Sonia Gandhi on Sunday admitted before the party’s working committee she kept protecting former CM Capt Amarinder Singh despite a series of complaints against him.

Sources said Sonia made these remarks after AICC screening committee chairman for Punjab Ajay Maken said Capt Amarinder should have been removed much earlier than September 2021, by when it was too late to offset anti-incumbency that had set in. He was commenting on the reasons behind party’s loss in the state.

Maken is learnt to have told the CWC when Channi reduced power tariff, “PCC chief Navjot Sidhu questioned the move asking where the money will come from and when Channi acted on the drug issue, Congress’ own leaders said the case against Bikram Majithia would not stand in court.”

“After Rahul Gandhi said the party was backing Channi, a leader from a humble background, as its CM face for Punjab, PCC chief’s family brought up Channi’s riches, damaging the party’s committed stand,” Maken is learnt to have said, while explaining why the Congress failed to retain Punjab. The leaders further noted the Congress had done nothing until September 2021 on its 2017 poll promises related to the sacrilege and drug issues. It was also stated at the CWC that people’s angst against Captain was evident from the fact that he lost Patiala by a substantial margin.

“Capt was widely seen to be soft on Akalis and both suffered hugely in the election. People were perhaps angry with the Congress not because it replaced Capt as CM but because it did so very late,” the CWC was briefed. Congress veteran Ghulam Nabi Azad is learnt to have questioned the “sudden replacement of Capt Amarinder as Punjab CM”.