Residents of Tarf Majari and Bhallan villages are up in arms against start of “illegal mining” in the area again in the Swan. 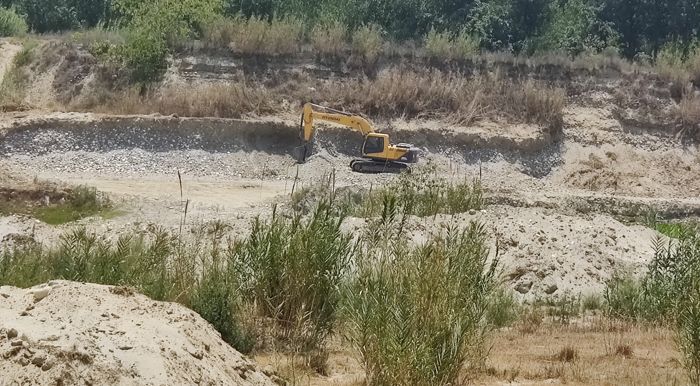 A machine excavates stones from the riverbed near Tarf Majari village.

After a brief lull since the new state government took over, residents of Tarf Majari and Bhallan villages are up in arms against start of “illegal mining” in the area again in the Swan.

The residents, who had formed an Ilaqa Sangharsh Committee last year to oppose illegal mining in the area, said they would start an agitation in case the authorities failed to keep a check on it.

Mining mafia has plundered the sand and gravel by digging the riverbed. This not only results in a loss to the state exchequer, but also makes the land adjoining the riverbed barren. —Tikka Yashvir Chand, Member, Ilaqa Sangharsh Committee

Tikka Yashvir Chand, one of the founder-members of committee, said the mining mafia had plundered the sand and gravel by digging the riverbed. This not only results in a huge loss to the state exchequer, but the land adjoining the riverbed also turns barren. Things started improving when the Assembly elections were declared in January, but the illegal mining had started again, he said.

The officials concerned were informed about the mining, but they refused to take any action, claiming it to be a “legal desilting site”, said Tikka.

When The Tribune team reached the spot, a large portion of the riverbed was found dug up to the depth of more than 20 feet at Tarf Majari village.

Harpal Singh, a local resident, said sand and gravel was lifted in thousands of tippers from the riverbed till the Assembly elections. Due to the mining, the riverbed has turned dry and left without any vegetation.

While dozens of tippers were loaded with stones, two Poclain machines and as well as JCB machines could be seen digging and loading stones from the river banks.

Sources confirmed that the mafia had already dug up at least 20 acres of the riverbed completely till the depth of 20 feet within a few months near Tarf Majari village.

A source in mining business claimed that the mafia had sold material worth more than Rs 100 crore from riverbed from September to December last year.

From 20-acre area in the Swan river near Tarf Majari village, the mafia had transported material in at least 50,000 tippers within

just three months after the last monsoon. One tipper-load of material fetches a minimum of Rs 5,500 at the pit head, he said.

Harpal Singh, a resident of Tarf Majari, said, “locals always welcome mining in the area as it generates employment opportunities for the people. This also keeps them mum on the issue.” Officials, however, denied that any illegal mining was going on in the area.

When contacted, SDO, Nangal Mining Department, Navpreet Singh, said river banks were being dug up to widen the riverbed at Tarf Majari.

He, however, confirmed that approximately 20 lakh tonne of material was dug up illegally from only one spot. “I joined in January 2021 as the Nangal SDO and noticed that a police complaint had been filed regarding it,” he said.