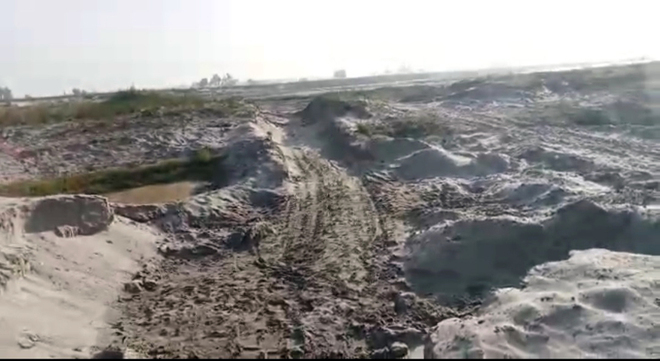 Illegal mining has left craters on the riverbed. Tribune photo

Even as administration has banned mining on the Sutlej riverbed till May 30, illegal quarrying is still going on in the area. However, the mining mafia has changed tactics. Earlier, heavy machinery was being used to quarry sand, but, now sand is directly moved to the user, in light of the restrictions imposed by the district administration.

A visit to Sanghera village in Dharamkot subdivision revealed that the mining mafia had hired local cart owners to transport sand from the riverbed during the night to yards in the nearby villages on the pretext of “own use”. Actually, this sand is stored and supplied to consumers from there.

A team of the Mining Department led by District Mining Officer Gursimran Singh Gill and Dharamkot DSP Subeg Singh raided a few such yards at Sanghera and adjoining villages in the past couple of days and found huge quantities of stocked sand. However, no legal action was taken against the owners of the houses and the big fish involved in illegal mining activities.

Gill admitted that he went to Sanghera and its adjoining villages and found sand dumped in many houses. During a checking of the records, it was found that the sand was bought by the residents from the authorised contractors. However, locals alleged that the mining sites authorised by the government had not been operational for past many months.

District Magistrate Sandeep Hans confirmed that he had banned the movement/plying of JCB machines, trucks and tractor-trailers on the riverbed and within 500 metre radius of the river embankments.

Jaspinder Kaur, sarpanch of Takhtuwala village, alleged that illegal mining on the riverbed had been going on unabated for the past many years. There were also reports of excessive sand mining even from the approved quarries. The mining beyond permitted depth with the help of heavy machinery has led to extensive damage, she said.