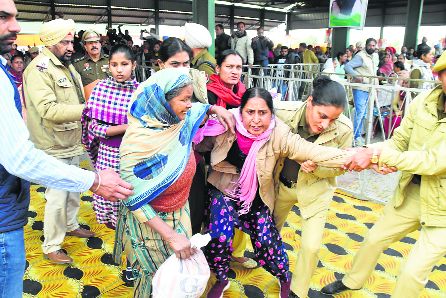 Members of Theka Mulazam Sanghrash Morcha being taken away by cops. Pawan Sharma

Chief Minister Charanjit Channi faced protests during a rally organised at Rampura Phul in Bathinda district on Thursday. He was here to inaugurate a slew of development projects and address a rally of party workers.

After reaching the rally venue, the CM asked people to sit a little closer to the cordoned-off area. During the movement, Theka Mulazam Sangharsh Morcha members found their way to the front of the stage. Midway into his speech, morcha members started raising slogans against the government and the CM, forcing him to pause for a while. Police personnel immediately took the protesters away. Around a dozen and a half protesters were detained and released after the CM’s rally.

Members of the Joint Front of Labourers’ union staged a protest at the venue and waved black flags to express their resentment over “non-fulfillment” of demands.

Meanwhile, the CM announced Rs 10-crore grant for development works in the constituency and laid foundation stone of the Rampura city flyover to be built at a cost of Rs 63.55 crore. He also dedicated building of Veterinary Science College, which will come up at a cost of Rs 105 crore, to the people of Rampura. — TNS