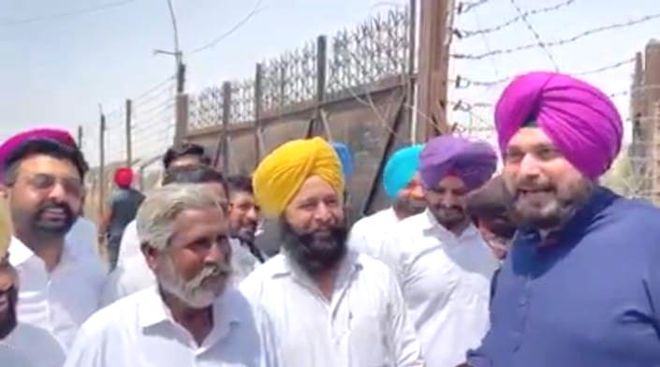 Former state Congress chief Navjot Singh Sidhu has demanded resumption of compensation for farmers, who own land across the border and face “hardships” in cultivating the fields.

For security reasons, farmers are not allowed to sow crops that grow up to 3-4 ft.

The Centre and state government used to give border farmers Rs 10,000 per acre in compensation annually. It was stopped in 2018.

Sidhu interacted with farmers near the barbed wire fencing in Ghurka village and listened to their grievances.

Meanwhile, Sidhu took a dig at the AAP government. “The mere announcement of freebies won’t develop the state. The government needs to generate extra income to turn promises into reality,” he said.

“AAP supremo Arvind Kejriwal had said it was his responsibility if any of the Punjab farmer died by suicide. More than 20 farmers have died by suicide ever since the AAP government has assumed charge. Why is he mum now?” asked Sidhu.