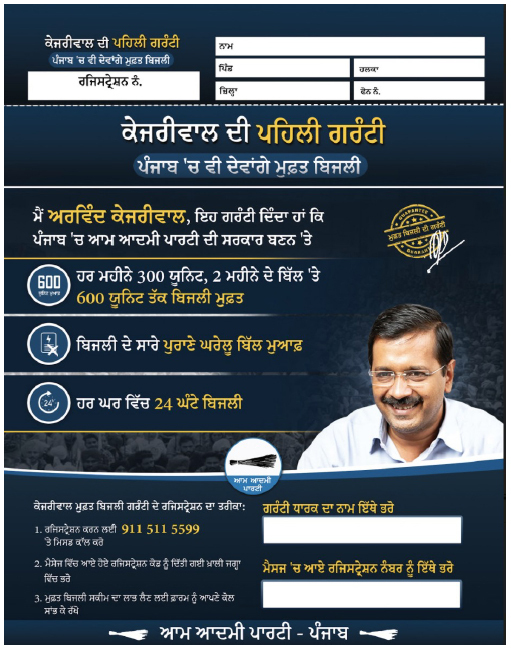 The certificate promises 300 units of free power to every household.

In a massive exercise to reach out to people ahead of the upcoming Assembly elections, the Aam Aadmi Party (AAP) has claimed to have delivered “bill guarantee certificates” for free and regular power to 35 lakh households in the state.

The development comes following AAP convener Arvind Kejriwal’s announcement during his June 28 state visit that 300 units of free power would be given to every household in Punjab. The number of households reached out by AAP is substantial going by the fact that the state has approximately 55.13 lakh registered households, as per the 2011 Census.

A team of 1,500 persons under the leadership of 500 halqa incharges contacted people directly in all 117 constituencies between August 3 and September 10. — AAP leader

Talking to The Tribune, a senior party functionary, claimed: “We carried out the exercise of contacting people directly at their homes, in all 117 constituencies, between August 3 and September 10. We prepared a list of all persons in the state contacted by our team (of approximately 1,500 persons) under the leadership of 500 halqa incharges.”

A senior party functionary and a former Deputy Commissioner of Police, Balkar Singh, who carried out the campaign in Kapurthala district, said: “We did not follow any specific list while visiting the households. Choosing to avoid the houses of political leaders, for obvious reasons, we went to people from different strata of society. We convinced them that we will deliver our promises on the same lines of Delhi.”

The video showed him standing on two moving SUVs on a city r...