In Mumbai, CM urges honchos to invest in state : The Tribune India

In Mumbai, CM urges honchos to invest in state 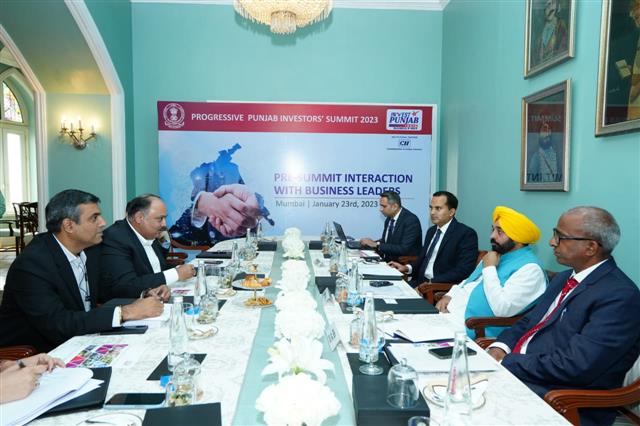 Chief Minister (CM) Bhagwant Mann today rolled out a red carpet for top honchos of the industry in Mumbai and invited them to invest in the state to give a boost to the industrial growth and open doors of prosperity for the youth.

CM Mann had detailed parleys with Godrej, Hindustan Unilever, Mafatlal group, Mahindra & Mahindra, Jindal Steels and other business houses during his itinerary here. He showcased Punjab as the most preferred destination to these industrial units and asked them to invest in the state.

CM Mann also apprised them that the state government was making strenuous efforts to further strengthen the single-window system for facilitating the investors.

CM Mann pointed out that earlier single-window service was merely a sham, devoid of any meaningful purpose, which not only demoralised the potential investors but also hampered the industrial development of the state.

He said now his government had ensured that the single-window system worked as a real facilitator to the entrepreneurs interested in investing in the state.

During a meeting with the representatives of the Hindustan Unilever (HUL), the Chief Minister asked them to expand their existing plant for tomato ketchup manufacturing in Nabha. He said the state government would encourage Punjab farmers to sow tomatoes thereby improving their economic lot.

The company assured Bhagwant Mann that they would explore the feasibility of setting up another unit in the state. The Chief Minister also had a detailed meeting with delegations of Thyrocare, an Indian multinational chain of diagnostic and preventive care laboratories, Kotak Mahindra Bank, Hind Terminal, a logistics company, the Godrej group, the Jindals and the Mafatlal group.

Taking part in a meeting with representatives of Mahindra & Mahindra, the Chief Minister said there was a huge potential for the tourism sector in the state especially around Ranjit Sagar Dam, Chohal Dam and others. The company showed keen interest in setting up its chain of Club Mahindra resorts in the state. The company representatives also invited the Chief Minister for the inauguration of the upgraded plant of Swaraj Tractors at Lalru.

During a meeting with representatives of Hindustan Unilever, Mann asked them to expand their existing plant for tomato ketchup manufacturing in Nabha. The firm assured him that they would explore the feasibility of setting up unit in the state.