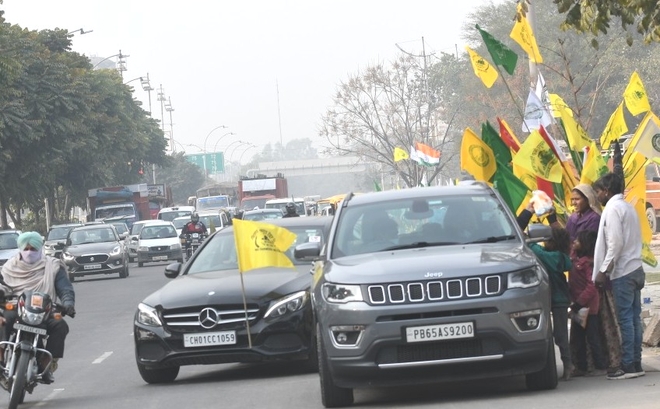 People in cities and villages of the region have started putting up farm union flags outside their houses and shops as a mark of support for the farmers’ agitation against the three agri laws and tractor parade on Republic Day.

At Multania village in Bathinda, the flags, stickers and banners supporting farmers’ agitation, in shades of yellows, greens, white, black, are visible almost everywhere. They are also seen all over in the region at shops, on the rooftops and gates of the houses, in the fields by the highway, and on the vehicles.

Harsewak Singh, former sarpanch of Multania village, said: “All villagers have come up above the party lines in support of farmers’ agitation. This is the issue of our bread and butter, so the entire village is one and supporting farmers."

Jagsir Singh, BKU Ekta Ugrahan leader said: “Earlier, when we used to ask people to hold union flags, they would hesitant, but times have changed. The same people now snatch flags from us as everyone wants it and we are facing a shortage of flags. They like taking photos with the union leaders as if they are celebrities. This is the power of this agitation.”

Even, social activist Harmilap Singh Grewal has started a drive of installing flags with a slogan “Kisan Mazdoor Ekta Zindabad” in the Bathinda city in support of tractor parade on January 26.

Every villager in the region is contributing as per its monetary status to support this agitation. Even labourers are also giving whatever little they can.