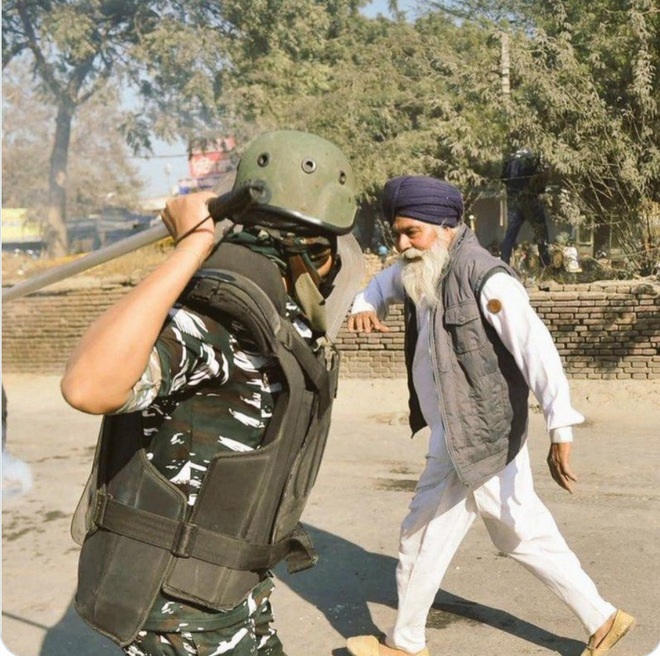 Sukhdev Singh’s photo of being lathicharged has gone viral.

Even as Congress leader Rahul Gandhi and BJP social media chief Amit Malviya have been slugging out over the photograph of Kapurthala-based farmer Sukhdev Singh (67), his family today confirmed that he had got injured after being hit by the police batons.

The photograph of Sukhdev Singh running to save himself from the police lathicharge had been posted by Rahul Gandhi a few days back on his Twitter handle, after which the BJP teams had counter-posted a short video to somehow show that he had not been hit. Today, the farmer’s testimonial video, who is stranded at the Singhu border, went viral. In the video, he showed injury marks on his left arm while also complaining that he got hit by the police on the back and lower legs.

Sukhdev’s family at Sanjogla village here said he had told them about the injuries on the very first day when he got hurt. “We told him to return if he was not feeling well because of his wounds but he was adamant to stay back. He said he had taken medicines for pain relief. He told us, ‘Hun tan morcha fateh karke hi aawanga’ (I will return only after our protest brings us victory),” said his 30-year-old son Sewa Singh.

Sukhdev’s wife Malwinder Kaur said, “My husband left here on Day 1 of the morcha. He neither belongs to any farmer association nor has he ever participated in any protests earlier but he was determined to go this time. He picked some clothes and ration and left in a trolley that ferried farmers from the village and told me that he may not return for a month or so.”