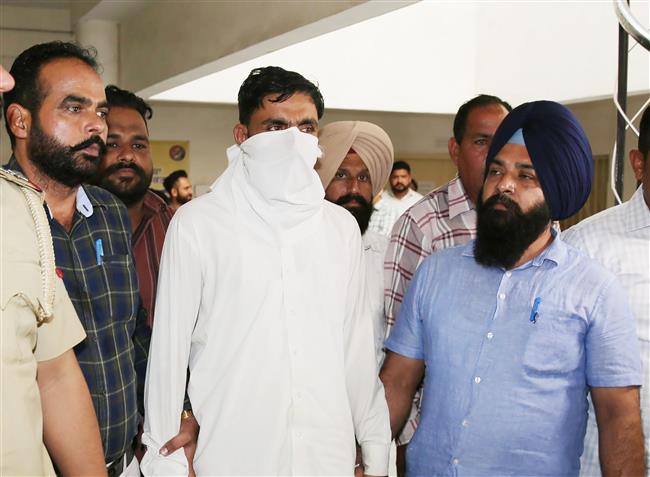 The accused in custody of the STF in Amritsar. Photo: Vishal Kumar

The Special Task Force has arrested an ITI teacher from Jammu and Kashmir and confiscated 5 kg heroin from his possession. He was part of an interstate drug cartel that was involved in smuggling contraband from J&K.

The suspect has been identified as Nizamdeen of Kirni Khurd village in Poonch district. His name figured during the interrogation of four drug traffickers, including a jail inmate.

AIG STF Rashpal Singh said with their arrest, the police had busted a drug module involved in smuggling heroin from J&K to Punjab.

Giving details, the AIG said on September 26, an STF official got a tip-off that Navtej Singh, alias Saba, of Chohla Khurd village, Jagmit Singh of Johal Dhaiwala village and Jagdeep Singh of Rani Walah, all in Tarn Taran, were running a drug racket from a jail.

Lodged in the Ferozepur Jail, Jagdeep used to contact Navtej and Jagmit for smuggling the contraband. Navtej and Jagmit were arrested with 500 gm heroin on September 26. A case under Sections 21-C, 25 & 29 of the NDPS Act was registered against them.

The AIG said on their disclosure, the police brought Jagdeep on production warrant from the jail on September 27.

During further questioning, Navtej said they bought heroin from a man known as Abdul. On this, a team led by DSP Sikander Singh visited Jammu and Kashmir and arrested the suspect who was later identified as Nizamdeen of Poonch district. He is an ITI teacher. His arrest led to seizure of 5 kg heroin.

“In case till now, 5.5 kg heroin has been seized and four persons arrested. Further interrogation is underway and we are hoping for more recovery,” said Rashpal Singh.

Smuggled it from J&K

AIG STF Rashpal Singh said with the arrest of four persons, the police had busted a drug module involved in smuggling heroin from Jammu and Kashmir to Punjab.