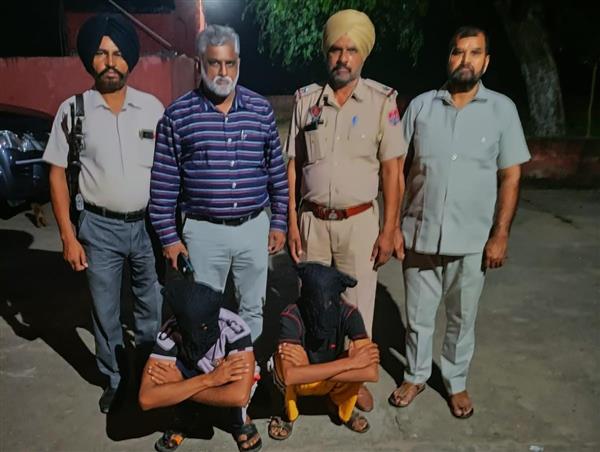 Two operatives of ISI-backed KTF module from Chamkaur Sahib area in custody of the Ropar police on Sunday. Tribune photo

Those arrested have been identified as Veeja Singh, alias Gagan, alias Gaggu, of Chand Nava village and Ranjodh Singh, alias Jyoti, of Ganji Gulab Singh Wala village near Moga. A revolver and a pistol along with 21 live cartridges have been recovered from them.

Four days ago, the Ferozepur police had recovered an AK-47 rifle along with two magazines and 60 live cartridges from fields at Arif Ke village. An investigation revealed that the consignment had been dropped using a drone on the directions of Dala. It was intended to be retrieved by Veeja Singh and Ranjodh Singh.

The DGP said after the recovery of the weapons from Ferozepur, an intelligence wing-led operation was launched across the state to nab the accused. The Ropar police managed to arrest both the accused from the Chamkaur Sahib area.

The accused have confessed that they had gone to Arif Ke village to retrieve the consignment, but failed to trace it. Later, it was recovered by the Ferozepur police on the information of a farmer.

“Both the accused have also confessed to having received a few weapon consignments, sent via drones, earlier. They were to deliver the weapons at specific locations as directed by Dala. The firearms were to be used for targeted killings to disturb communal harmony in the state,” said the DGP.

A case has been registered under Section 153A of the Indian Penal Code and Section 25 of the Arms Act against the accused, he added.