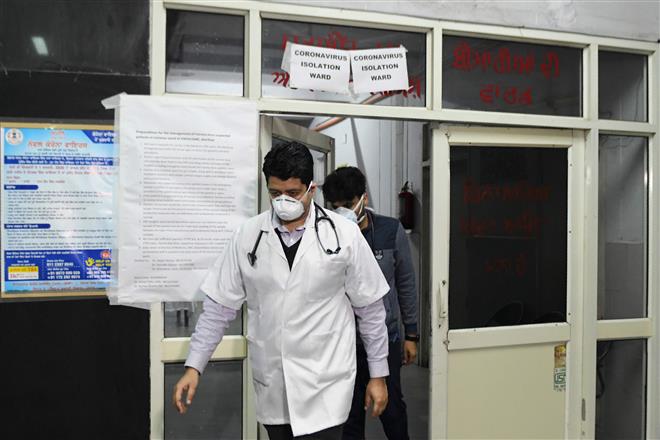 Doctors are seen in front of an insloation ward for coronavirus, at Guru Nanak Dev hospital in Amritsar. AFP

A Hoshiarpur resident, who returned from Italy last week, has been tested positive for coronavirus afflictions, becoming the first such case in Punjab, an official said here on Monday.

“The man who returned to Amritsar by an Air India flight from Milan in Italy has tested positive for coronavirus. He had landed at Amritsar International Airport via Delhi on March 4 along with his two other family members,” Punjab Principal Secretary (Health) Anurag Aggarwal said.

The patient is a resident of Hoshiarpur, he said, adding he was tracked at the Amritsar airport and got admitted to a government hospital in Amritsar.

After he was found corona positive last week after preliminary investigation, his samples were sent to National Institute of Virology, Pune, which confirmed on Monday that the man is suffering from coronavirus afflictions.

His condition is “stable”, the principal health secretary said. — PTI