With CM Charanjit Singh Channi filing his nomination papers from Bhadaur on Monday, the reserved constituency is set to witness a keen contest.

I have come to Malwa with a mission…Though Capt and Badal sahib were there, the area lacks development. — Charanjit Singh Channi, CM

While voters are hopeful to see development in their area which is deprived of even the basic amenities, Channi’s political opponents have started targeting him, calling him an “outsider”. 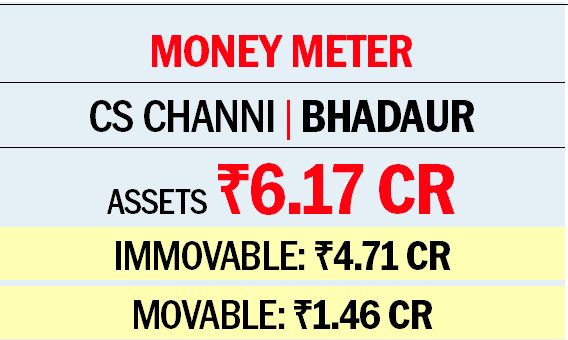 Unfazed, Channi said he had come like Sudama and hoped that people of the Malwa region would take care of him like Lord Krishna.

He claimed he had massive support in the region and would win both Chamkaur Sahib and Bhadaur seats. “I have come to Malwa with a mission…The party high command has ordered me to contest both seats. Malwa has not seen much development and I will give the region its due,” said Channi, who is pitted against Aam Aadmi Party’s Labh Singh Ugoke and SAD-BSP’s Satnam Singh Rahi.

During the last elections, AAP’s Pirmal Singh Dhaula had emerged victorious. He was polled 57,095 votes. The political equations changed when Dhaula joined the Congress a few months ago.

Ugoke claimed, “AAP’s support base is still intact. Bhadaur got nothing during the Congress rule. How will Channi face voters? Besides, he is an outsider.”

There are a total of 77 villages in the constituency and two urban areas, Tapa and Bhadaur. Lack of health, education and road infrastructure and other basic amenities are the main issues.

SAD’s Rahi said, “In November last year, the CM had announced Rs 25 crore for the development of Bhadaur. Area residents will question him on his false claims as no funds were released.”

CPI (M) candidate Balvir Singh said, “During the last five years nothing was done to end the drug menace and to improve health and education facilities. Voters are aware of the Congress’ tactics.”