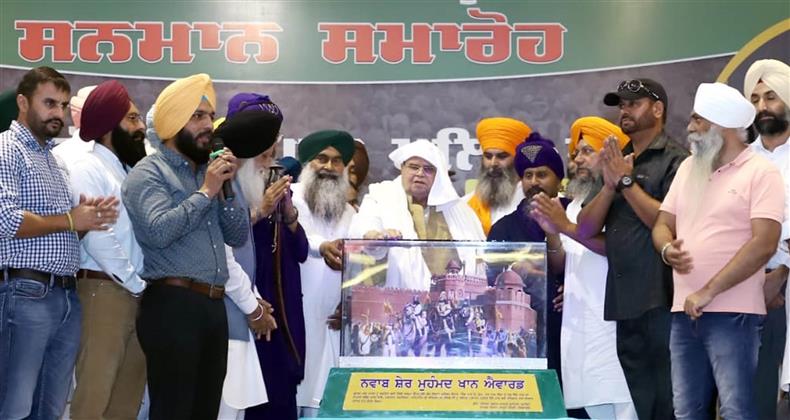 Meghalaya Governor Satya Pal Malik pays tributes to the farmers, who died during the agitation in Delhi, at Beas Pind in Jalandhar.

Meghalaya Governor Satya Pal Malik today said the government was still not serious about farmers’ issues and farmers had another long battle due for the future.

Addressing a gathering at an event held at Beas Pind here to honour farmers who had died during the Kisan Andolan, Malik said the Union Government and the Prime Minister initially took the farmers’ protests lightly.

Malik addressed a congregation of farmers at a ‘sanman samaroh’ dedicated to the farmers who died during the agitation in Delhi. Tributes were also paid to the recently deceased icons of Punjab — Deep Sidhu, Sandeep Nangal Ambiyan, Navreet Singh Dibdiba and Sidhu Moosewala.

Malik said the government finally withdrew the farm laws, but issues like guaranteed MSP and withdrawal of court cases were still pending. He said he would also take up the issue of the release of Sikh prisoners with the PM.

Malik said, “When I saw that farmers remained on the Delhi borders for four months, and no one approached them, I took up the issue with the PM. I asked him to talk to them and send them home. He said ‘chale jayenge Sat Pal, kyon pareshan ho rahe ho?’. He took it lightly,” he said.

Malik added, “I told him that he was committing a mistake. I told him he doesn’t know them. They won’t go like this. This is the community, the Gurus of which sacrificed their four Sahibzadas but refused to compromise on principals. They (Sikhs) don’t forget for 300 years. My insistence paid dividends, but with delay.”

Malik added, “Now, he is visiting gurdwaras and calling them for talks. He understood eventually, apologised and withdrew farm laws.”

He said, “However, the government is not being honest. Its intentions towards farmers are not right. It hasn’t done anything on MSP, nor has it withdrawn cases against farmers, nor have people who climbed the Red Fort been freed. I want to tell my farmer brothers that we are heading towards a big fight again and for that, I will be with you again.”

When I saw that farmer leaders remained on the Delhi borders for four months of protests, and no one approached them, I took up the issue with the PM... But, he took the issue lightly. — Satya Pal Malik, Governor, Meghalaya