Kapurthala: 32 hrs on, no trace of infant despite efforts of NDRF team : The Tribune India

Kapurthala: 32 hrs on, no trace of infant despite efforts of NDRF team 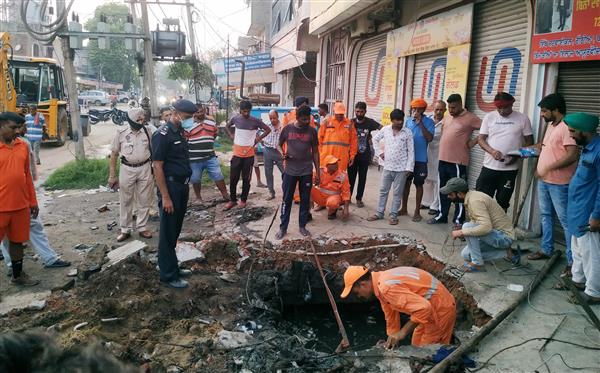 The NDRF team carries out a rescue operation in Kapurthala.

More than 32 hours since a two-year-old child reportedly slipped inside the storm water sewer line, the NDRF, Army, MC and police officials have failed to get any clue of his whereabouts.

Victim Dehaan, who is the child of a Bihar migrant couple, was reportedly playing near his shanty near Shalamar Bagh here with three other children when the incident occurred on Tuesday.

Since yesterday, the teams, including 29-member NDRF team from Bathinda, have dug up to 60 km of the nullah, removed its concrete covering and have even physically gone in through the thick sludge to look for Dehaan but to no avail.

Efforts are now being made to go on further while the teams believe that there is only a remote possibility of the child having moved so much further.

Videos of the child playing near the nullah little before the incident have also surfaced but the officials say that there is still no direct evidence of child having slipped inside.

DC Vishesh Sarangal and SSP Navneet Singh have made several rounds to the spot for an assessment of the situation. “We are continuing with our rescue operation and making all fervent attempts. We have put up meshes at various points so that if there is any flow of water, the child gets trapped in it and gets rescued,” said the DC.