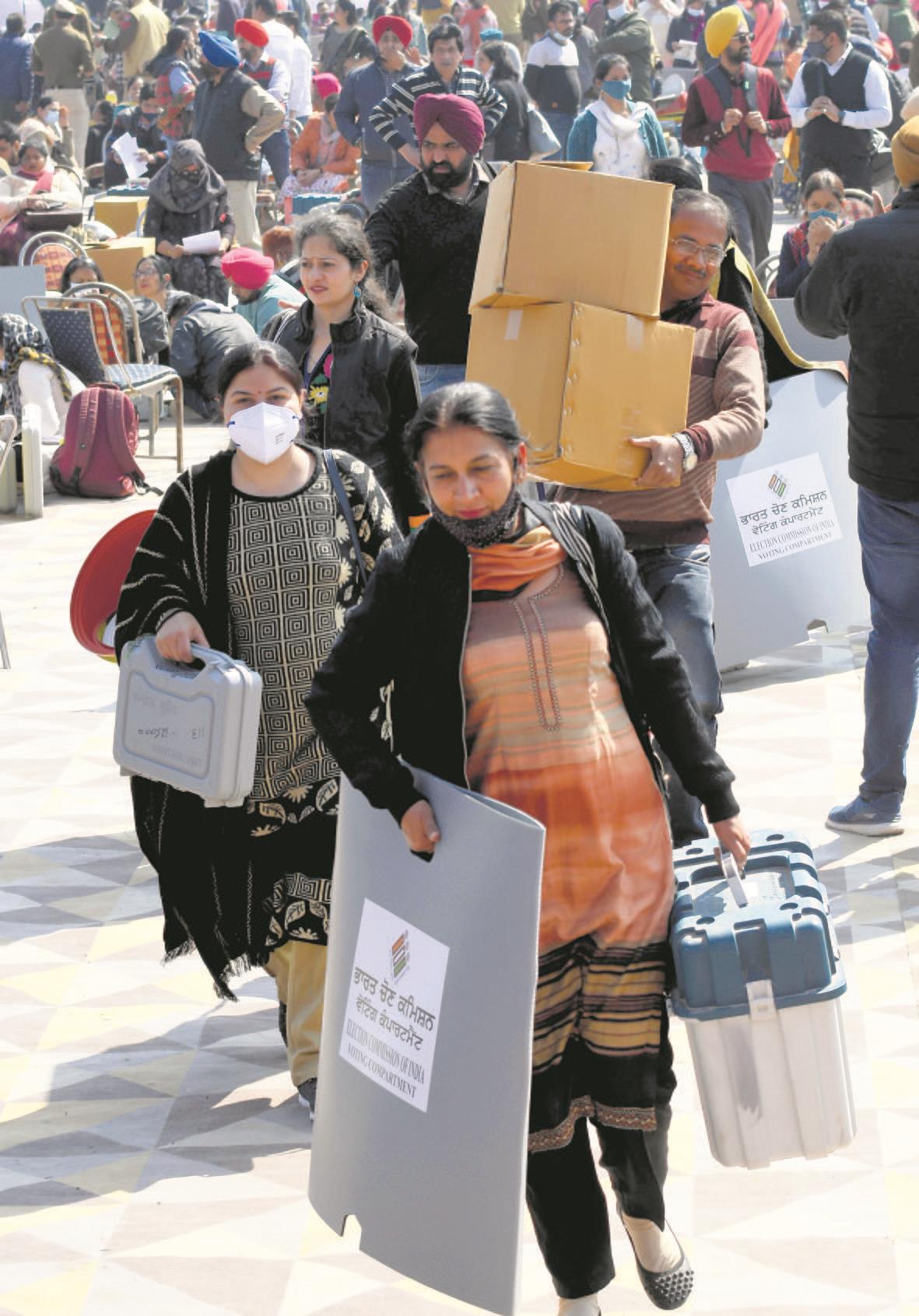 Officials leave for polling stations after collecting election material at a sports complex in Mohali on Saturday. Tribune photo: Vicky

Punjab is all set for a multi-cornered contest in the Assembly polls as more than 2.14 crore voters would exercise their franchise to decide the fate of 1,304 candidates, including 93 women and two transgenders, across 117 constituencies today. 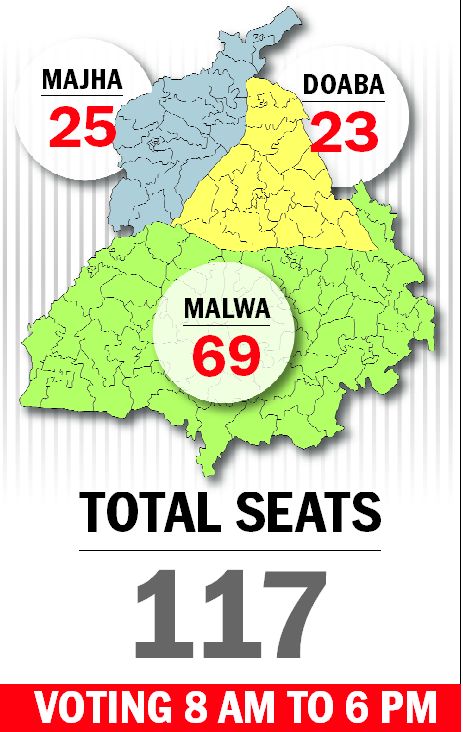 The polling will be conducted from 8 am till 6 pm while the counting of votes will take place on March 10.

The ruling Congress has been banking on decisions like reduction in power tariff and fuel prices, taken during CM Charanjit Singh Channi’s 111-day tenure. The Aam Aadmi Party (AAP), which has emerged as a major contender, is eyeing to wrest power while projecting the Delhi model of governance.

The stakes are also high for the Shiromani Akali Dal (SAD), which is contesting the polls in alliance with the Bahujan Samaj Party after breaking ties with the BJP in 2020 over the farm laws issue. With Sukhbir Singh Badal in the driving seat, the SAD called itself “Punjab’s own party” and promised all-round development in the state.

The BJP, which used to be a junior partner during its previous alliance with the SAD, is fighting the elections as a major partner. Entering into an alliance with Capt Amarinder Singh-led Punjab Lok Congress and Sukhdev Singh Dhindsa-headed SAD (Sanyukt), the saffron party has asked voters to go for a “double-engine government” for “Nawan” (new) Punjab.

The Sanyukt Samaj Morcha, comprising various Punjab farmer bodies, which had taken part in the agitation against the Centre’s now-repealed farm laws, is contesting the polls too. All major political parties have promised a host of freebies to woo voters. While AAP has promised Rs 1,000 for all women, the Congress has assured Rs 1,100 per month for needy women. The SAD-BSP alliance has promised Rs 2,000 per month to all women heads of blue card holder families (BPL beneficiaries). The Congress and the SAD-BSP alliance have promised one lakh government jobs.

As many as 28,328 ballot units and 24,740 EVM-VVPATs were being used in this election, the Chief Electoral Officer said. There were six Assembly constituencies — Kharar, Sahnewal, Ludhiana South, Payal, Patiala Rural and Patiala — with two ballot units, he said.

Raju said apart from three special state observers, the Election Commission had appointed 65 general observers, 50 expenditure observers and 29 police observers. As many as 2,083 sector officers had been deployed to assist polling parties, he said.

He said 17 constituencies had been identified as expenditure sensitive. There are 117 dispatch centres and 117 collection centres while 117 EVM strong rooms had been established at 67 locations in the state. He said 4,44,721 persons above 80 years of age, 1,38,116 PwD voters and 162 Covid patients had been offered Form 12D for postal ballot facility. The Chief Electoral Officer said facilities such as potable water, tent, chairs and at least one wheelchair would be provided at every polling station.