Ask him to act against those who targeted party workers 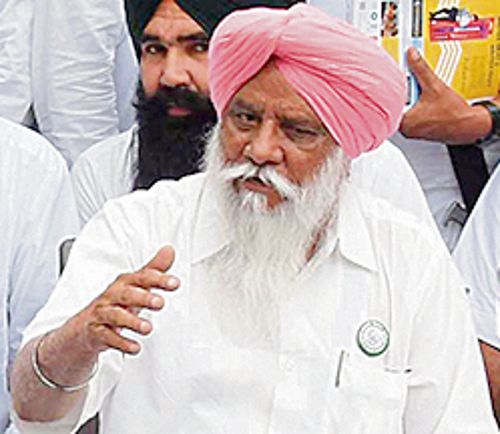 The Shiromani Akali Dal (SAD) today asked senior farmer leader Balbir Singh Rajewal to keep the ‘kisan andolan’ above politics and requested him to take concrete action against hooligans who had targeted Akali workers proceeding to Delhi to participate in the party’s march to Parliament instead of attacking the party.

Addressing a press conference here, senior SAD leader Prof Prem Singh Chandumajra, Maheshinder Singh Grewal and Dr Daljit Singh Cheema said it was unfortunate even after admitting that some wrong elements wanted to defame the ‘kisan sangharsh’, the farmer leader had neither secured an unconditional apology from those guilty of hooliganism nor subjected them to the process of law.

They also took objection to Rajewal’s statement that only SAD legislators and MPs should have gone to protest in Delhi. “We fail to understand what objection he has to a protest by thousands of people. Earlier also, thousands of farmers marched to Parliament which sent out a message of unity and strength attracting the worldwide attention”.

Asserting that the SAD held Rajewal in high esteem, the SAD leaders said “Rajewal however should not lower his dignity by making political statements. We are ready to debate political issues separately and the kisan forum should not be used for the same”. Dr Cheema rebutted the assertion of Rajewal that the SAD was defaming the ‘kisan andolan’ by releasing videos. — TNS