Taking up a writ petition, Supreme Court has asked Sonepat district administration to provide a way to the common people in the public interest 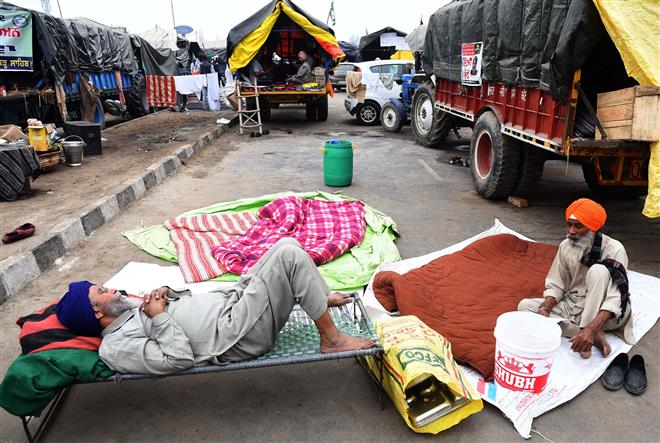 Farmers rest along a roadside during their protest against the Center's new farm laws, at Singhu border. Tribune file photo

The Haryana government on Wednesday formed a high-powered committee to talk to farmers for removing the National Highway-44 blockade at the Kundli-Singhu border due to the farmers’ sit-in there against the three central farm laws.

It comes a day after Sonepat Deputy Commissioner Lalit Siwach held a meeting with farmers’ representatives over the blockade.

An official statement on Tuesday had said while taking up a writ petition, the Supreme Court has asked the Sonepat district administration to provide a way to the common people in the public interest.

In compliance with these orders, Deputy Commissioner Lalit Siwach held a meeting with farmers’ representatives in Sonepat.

On Wednesday evening, a high-level meeting was held under the chairmanship of Chief Minister M L Khattar here, which, Home Minister Anil Vij said, had been convened in the wake of the apex court’s orders last month.

“To comply with the apex court’s orders, a state-level high-powered panel has been formed under the chairmanship of Additional Chief Secretary (Home) Rajeev Arora.

“Keeping in view the Supreme Court orders and the fact that common people are facing inconvenience due to the blockade, the committee will hold talks with Samyukt Kisan Morcha on the opening of the way,” Vij, who was also present in the meeting, told reporters later.

The Committee will have DGP, ADGP (Law and Order) amongst its members.

On Tuesday, Sonepat DC had told farmers that while taking up a writ petition filed by Noida resident Monica Agarwal, the Supreme Court has ordered that the farmers protesting on the Kundli-Singhu border in Sonipat district on National Highway-44 should give way to common people and shift to one side of the road.

Siwach, as per the official statement, had said the cooperation of the farmers is expected so as to comply with the Supreme Court directions.

The Supreme Court had last month said the Centre and Delhi’s neighbouring states should find a solution to the road blockades on the national capital’s borders.

The farmers are protesting against the passage of three laws—Farmers’ Produce Trade and Commerce (Promotion and Facilitation) Act, 2020, Essential Commodities (Amendment) Act, 2020 and Farmers’ (Empowerment and Protection) Agreement on Price Assurance and Farm Services Act, 2020. PTI