Devout believe that a dip in the ‘sarovar’ of Kaudiyawala Ghat Gurdwara, located close to the spot where eight people were killed, can cure people of skin diseases 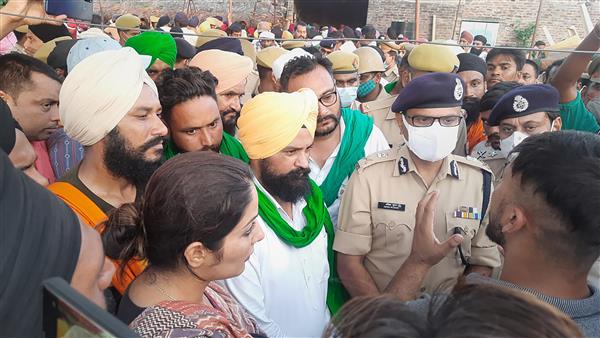 ADG Gorakhpur Zone Akhil Kumar interacts with the family members of a victim of the Lakhimpur incident, at Moharnia village in Bahraich district. PTI

The spot near Tikonia village where violence erupted on Sunday during a farmers’ protest is amid an area linked to the life of Guru Nanak Dev, the founder of Sikhism.

Granthi Baljeet Singh from Kaudiyawala Ghat Gurdwara says the Guru came here in 1554 and cured a person of “kodh”, or leprosy. The shrine gets its name from there.

The devout believe that a dip in the ‘sarovar’ of the gurdwara, located close to the spot where eight people were killed, can cure people of skin diseases.

Lakhimpur Kheri district and the adjoining areas in the Terai have been home to Sikh farmers for generations – including those who came during the time of the Awadh nawabs, migrants from undivided Punjab and the more recent settlers.

On Sunday, Sikh farmers formed a sizeable number of those protesting over the visit of Uttar Pradesh Deputy Chief Minister Keshav Prasad Maurya. And all the four dead farmers had Punjabi names.

They were allegedly mowed down by a vehicle carrying BJP workers. The other four victims included two BJP workers, allegedly lynched by angry protesters.

Many farmers from Lakhimpur Kheri and the neighbouring areas in the Terai have been actively involved in the protests against the agri-marketing laws enacted at the Centre last year.

Many have made trips to the protest sites on Delhi’s borders – dominated by farmers from Punjab and Haryana—where the agitation has been on for months now. They also attended the Kisan Mahapanchayat in Muzaffarnagar last month.

Bahraich, Shahjahanpur and Pilibhit are among the other Uttar Pradesh districts with a significant population of Sikh farmers.

Largest in area among the 75 UP districts, Lakhimpur Kheri is known for sugarcane cultivation, and there are nine sugar mills in the district.

Sarjit Singh, a retired sports teacher at a government school in Bahraich, says Sikh farmers from Punjab started buying forestland in the Terai districts because the same amount of money would get them bigger pieces of land than back home.

“Some sold their five bighas of land in Punjab and bought 25 bigha in Bahraich near the forests,” he says.

But there have been settlers earlier as well.

Balwant Singh Ramoowalia, who has been a minister in UP and at the Centre, said Sikhs came to Lakhimpur Kheri from undivided Punjab in the 1940s.

Earlier, the nawabs of Awadh encouraged members of the community to settle in the area, and many bought land, he tells PTI.

“The first chief minister of Uttar Pradesh, Govind Ballabh Pant, too had encouraged Sikhs to buy land in this area,” says Ramoowalia, now a member of the UP legislative council from Akhilesh Yadav’s Samajwadi Party.

According to an elderly Pyara Singh, there are three or four lakh Sikhs in Lakhimpur Kheri. Most farmers from the community are based in Palia, Nighasan and Gola tehsils in the district.

Of the four farmers killed on Sunday, Lovepreet Singh and Nachatar Singh hailed from Lakhimpur Kheri. Gurvinder Singh and Daljeet Singh were from Bahraich.

The community is represented in the Yogi Adityanath cabinet by Baldev Singh Aulakh. Ramoowalia was a minister during the SP term.

Lakhimpur farmers say they were angry with Union Minister of State for Home Ajay Kumar Mishra over a “provocative” speech he made after being shown black flags during his public meeting in his Kheri Lok Sabha constituency.

He said he could discipline such people in “two minutes”, the farmers say. Ashish Mishra, the minister’s son, is named in an FIR registered over the farmers’ deaths.

But he claims he was nowhere near the trouble spot when the violence took place. PTI